There has been much concern and controversy about mining uranium near the Grand Canyon and its possible impact on water in the Colorado River, water that is used to supply drinking water in much of Arizona, California, and parts of Nevada. There are over 1,300 known or suspected breccia pipes in the region, many of which contain uranium oxide as well as sulfides of copper, zinc, silver, and other metals. According to the Arizona Geological Survey, “Total breccia-pipe uranium production as of Dec. 31, 2010, has been more than 10,700 metric tons (23.5 million pounds) from nine underground mines, eight of which are north of Grand Canyon near Kanab Creek.”

A new paper from the Arizona Geological Survey examines those concerns:

A new study by the Arizona Geological Survey (AZGS) shows that potential accidental release of uranium to the Colorado River due to a mining-related accident in the Grand Canyon region would cause little change to the large annual flux of dissolved uranium that is carried naturally by the river.

In July 2009, U.S. Secretary of the Interior Ken Salazar called for a two-year withdrawal of nearly one-million Federal acres from exploration and new mining claims in the Grand Canyon region in response to concerns about the potential environmental impact of uranium mining. As part of the withdrawal process, the U.S. Bureau of Land Management, working in cooperation with federal, state, county and tribal agencies, including the AZGS, released on 17 February 2011, a Draft Environmental Impact Statement (DEIS). The DEIS identified increases in uranium concentration in water due to mining-related activity and subsequent impact on downstream water quality as a “relevant issue for detailed analysis”.

To examine one potential impact of uranium mining in the Grand Canyon region on uranium levels in Colorado River water, Dr. Jon Spencer (AZGS Senior Geologist) and Dr. Karen Wenrich (Consulting Geologist) posed a hypothetical , worst-case, scenario involving an accidental spill of the entire contents of an ore truck hauling 30 metric tons (66,000 pounds) of uranium ore containing one percent uranium (ore grades in northern Arizona are typically somewhat lower), followed by flash-flood transport and dissolution of all spilled uranium into the Colorado River. In this scenario, the ore is pulverized and dissolved within a single year, releasing 300 kg of uranium directly into river waters.

The result: uranium concentration of Colorado River waters would increase from 4.00 to 4.02 ppb (parts per billion by mass); an increase of just one half of one percent that would be masked by natural uranium-concentration variations as determined by measurements reported in a recent U.S. Geological Survey study. Furthermore, the uranium content of Colorado River waters would remain well below the 30 ppb Maximum Contaminant Level set by the Environmental Protection Agency (EPA) for safe drinking water.

The small change in dissolved uranium content of Colorado River waters as a result of this hypothetical accident is due to the very large annual volume of river water that passes through the Grand Canyon and the approximately 60 metric tons of dissolved uranium that is naturally carried by the river each year.

The study is: Spencer, J.E. and Wenrich, K, 2011, Breccia-pipe uranium mining in the Grand Canyon region and implications for uranium levels in Colorado River water. Arizona Geological Survey OFR-11-04, 13 p. It may be downloaded here.

UPDATE: A U.S. Geological Survey report issued in 2010, provided data showing that the river carries an average of 120,000 lbs (a range of 40-80 tons) of uranium down the Grand Canyon every year. The uranium is apparently eroded from normal crustal concentrations over the large drainage area of the Colorado River basin.

The map below shows the location of the breccia pipes.

The graphic below shows a cross-section of a typical breccia pipe. 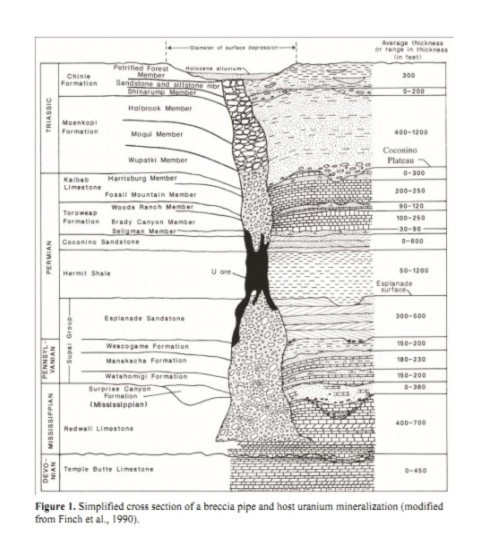