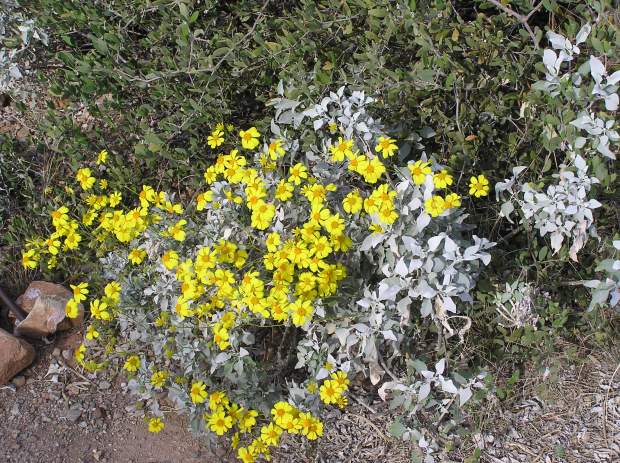 Brittlebush (Encelia farinosa) is a woody desert shrub with dense branches that usually form a hemispheric mound three to five feet high.  The leaves range from dark green to gray-green to almost silvery.  The gray-silver color is due to hair-like growths that tend to shade the leaves. The more arid the conditions, the smaller and whiter the leaves.  Brittlebush is often a winter-flowering plant, but may  flower during the fall, spring, and early summer as well depending on rainfall.  The flowers are yellow and daisy-like.  Some brittlebush in my yard are flowering now in early December.  The range is the Sonoran Desert and parts of the Mohave Desert.  It favors gravelly slopes and sandy washes.  Brittlebush does well as a cultivated plant and attracts butterflies and bees.

Brittlebush is very drought tolerant and will go dormant and look dead.  The leaves will turn very brittle and eventually fall off.  The plant can also be cut back nearly to the ground and revive the next season.

The plant was/is widely used by native people.  The upper stems exude a yellowish gum or resin that can be chewed.  The gum was also burned as incense (hence the Spanish name incienso).  The fragrance is due to terpenes or terpenoids which are components of essential oils. Vitamin A is a terpene. You can sample the fragrance by crushing the green leaves. It smells like strong tea to me.  Tea made from the dried leaves is used to treat bronchitis and arthritis.   The gum was also used to seal pots.

Yellowish-brown resin collected from the base of the plant can be heated and used as glue.  Native people used this to glue arrowheads to the shaft, for instance.