Sometimes mines just vanish.  Such seems to be the case with the Pontatoc mine located near the north end of Pontatoc Road in Tucson and just south of Pontatoc Ridge.  The map below shows the general location (at the balloon).

The Pontatoc mine was discovered in 1906 and worked until 1917.  It produced about 5,000 tons of copper, silver, gold, and molybdenum ore.  Mindat.org reports that handpicked ore assayed at 4% copper, 0.5 oz./T silver, and a trace of gold.

Workings consisted of two shafts, one 105 feet deep, the other 125 feet deep, plus a pit and tunnel operations.  The following graphic from the Pusch Ridge wilderness study by George S. Ryan  shows again the general location and location of mine workings on Pontatoc Ridge to the north.

According to Ryan, Pontatoc Ridge was intensely prospected shortly after the production from the Pontatoc mine itself.  There were several shows of oxide copper on the ridge, but apparently they didn’t amount to much.

So far I’ve shown rather vague locations for the Pontatoc mine and it may surprise you where it was.  The map below shows the mine location with current development.

The following graphics show where I think the mine was, just west of the intersection of E. La Paloma Dr. and E Coronado Dr.  There is no trace of the pit or shafts, presumably they have been filled in. The detailed picture does show what is presumably the scarp of the fault in which the mineralization developed.

Some mines just disappear and houses are built along or near fault zones.  This particular fault is apparently inactive, homeowners shouldn’t worry.

By the way, Ryan reports that gypsum was mined from Tertiary lake beds in the same area and used  for plaster in the Tucson building industry prior to 1966. 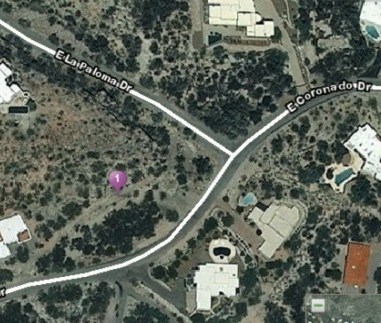 http://www.mindat.org/loc-35539.html (Note this reference erroneously lists the Township as 12S rather than 13S.)

Gold of Cañada del Oro and rumors of treasure

Old mines of the Tucson Mountains

Oracle Ridge Mine on Mount Lemmon

Sierrita Mine is only U.S. source of Rhenium

The I-10 copper deposit