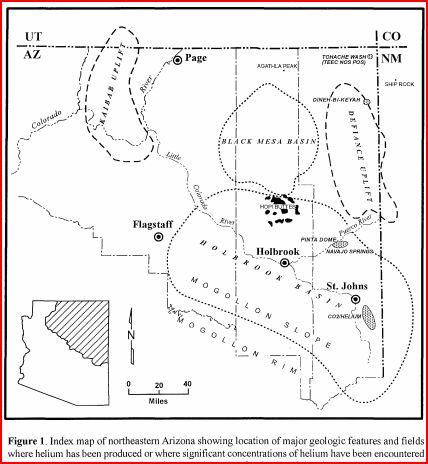 According to a story in the Arizona Daily Star: “The United States is running out of helium.” However, as pointed out by Arizona State Geologist Lee Allison, Arizona has helium resources that could help fill the gap.

Helium is used in many industrial applications such as in the manufacture of optical fiber and LCD screens, in medical imaging, and in welding.

A report (OFR 03-05) from the Arizona Geological Survey: “Review of helium production and potential in Arizona” is instructive (summary here, full report here):

Some of the richest helium-bearing gas in the world was produced from fields completed specifically for helium in northeastern Arizona in the 1960s and 1970s. All production came from fields in Apache County (Figure 1). Three fields were located in the Holbrook Basin south of the Defiance uplift about 35 miles northeast of Holbrook. One field was located in the Four Corners area north of the Defiance uplift near the small community of Teec Nos Pos. Helium-rich gas was discovered in the Dineh-bi-Keyah oil field on the northeastern flank of the Defiance uplift in the late 1960s but was not produced until 2003. Helium concentrations range from trace amounts up to 10% in the Holbrook Basin and Four Corners area. Both areas have good potential for additional discovery and production of helium. Helium content in gas is generally considered to be of commercial interest when the concentration is above 0.3%. Most of the helium produced in the United States is extracted from natural gas from fields in Wyoming, Utah, Colorado, New Mexico, Kansas, Oklahoma, and Texas. The extracted helium is processed into a crude helium product, which varies from 50% to 80% helium, and is ultimately purified to a Grade-A helium product, which is 99.995% or better. Most helium is shipped as a liquid to distribution centers in trucks from where it is sold as bulk liquid helium or gasified and compressed into tanks and small cylinders for delivery to end users.

On the Colorado Plateau in NE Arizona, helium is found in Paleozoic age sediments. According to AZGS, “There appears to be a correlation between … diatremes [volcanic pipes that consist mainly of breccia] and other deep-seated intrusive rocks and the presence and production of helium. Helium is often associated with carbon dioxide which is produced from wells for use in petroleum recovery. Helium is also a byproduct of oil and gas production.

Helium has two potential sources within the earth. First, it could be primordial. i.e., it was part of the original formation of the planet. The deep Precambrian crystalline rocks beneath the sediments on the Colorado Plateau could provide this source.

The Arizona Geological Survey estimates that the potential for additional helium discovery in the Colorado Plateau is very good. In fact, one geologist said the potential in the Four Corners region was “enormous.”

Petroleum and Natural Gas Potential of the Paradox Basin

Arizona may become a major producer of potash

Old mines of the Tucson Mountains

Oracle Ridge Mine on Mount Lemmon