The urban heat island effect (UHI) is the phenomenon that cities are usually much warmer than surrounding rural areas, especially at night. The main cause of UHI is that in cities, the land development, concrete and asphalt, absorbs heat during the day and gives it up during the night. Often, proponents of catastrophic anthropogenic global warming (CAGW) have claimed that the rising night-time temperature is proof of an enhanced greenhouse effect due to carbon dioxide emissions.

In this post, we will compare the temperature history of the Phoenix metropolitan area with that of Maricopa, AZ, a small rural town about 25 miles south of Phoenix (see map). The data come from the National Weather Service (NWS) in a report dealing with UHI and precipitation. 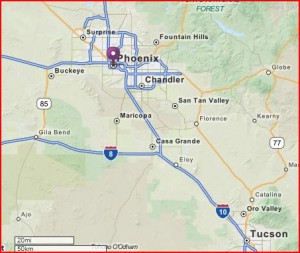 NWS says “The mechanisms which lead to the creation of an urban heat island (UHI) have been studied for nearly a century and are well understood….The effects of the UHI are most pronounced during the summer (June-July-August) months.”

NWS first compares the average daily high temperatures in summer for Maricopa and Phoenix. They note that there is little difference in the two data sets. 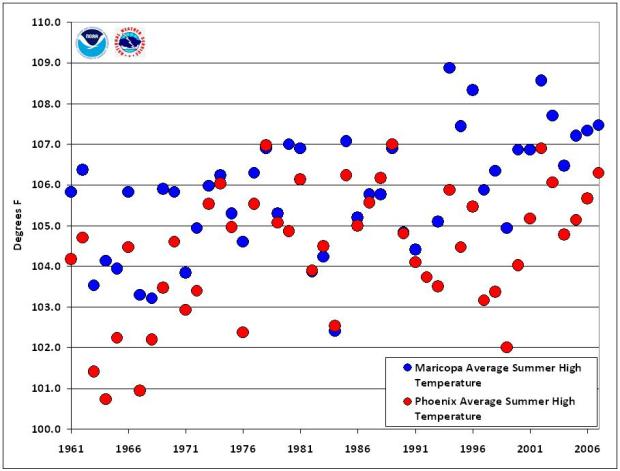 NWS then compares the average summer low temperatures and we see a large divergence with the Phoenix temperatures much warmer than rural Maricopa.

NWS attributes this temperature difference to UHI. The steady rise in both data sets could reflect the increasing UHI in both places. If the difference were due to an enhanced global greenhouse effect, why is there a divergence, especially when high temperatures are similar?

NWS notes that “no upward trend was found in the maximum temperatures, and in fact, the urban temperatures were consistently 0 to 4ºF cooler than the rural station. The hypothesized reason for this is the “oasis effect”, where solar energy is expended on evaporating water from an unnaturally moist surface in the urban areas due to irrigation activities.”

Many temperature stations are located in urban areas with the consequence that they report artificially higher temperatures. These high temperatures are averaged (or homogenized) into regional data sets that then get reported as more “global warming” than actually occurs. And that is one reason why 50% of warming claimed by IPCC is fake.