The Pirate fault on the west side of the Santa Catalina mountains defines the western escarpment of the range and parallels Canada del Oro wash.

The Arizona Geological Survey has just published a new paper on the fault: 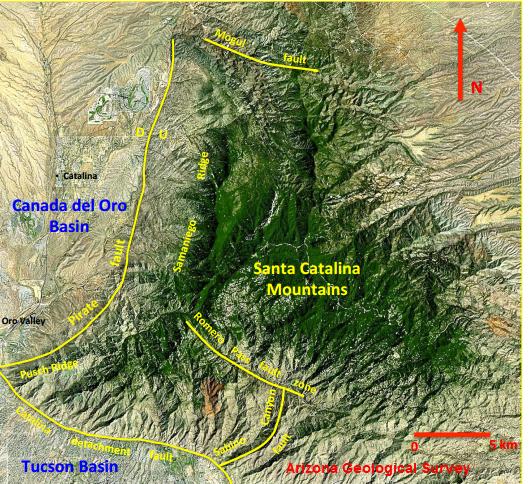 Not so long ago, mountain building was alive and well in southern Arizona. [The Pirate] fault demarcates uplift of the Santa Catalina structural block to the east, from the down-dropped, alluvial Cañada del Oro basin to the west. Vertical displacement on the nearly 16 mile long fault is about ~ 2.5 miles or 13,200 feet, which occurred over a six million year span from ~ 12 to 6 million years before the present.

Once buried under detritus eroded from the uplifted Santa Catalina Mountains, the Pirate fault is currently being exhumed by the downcutting Cañada del Oro and its tributaries. “This field examination reveals the fault to have left a sparse but diverse collection of remains implying a varied history of fault development and evolution”, says Hoxie. In detailed mapping of the trace of the Pirate fault zone, he identified a number of sites of exposed fault rocks and fault-related features, ten of which are described in detail. Key observations include identifying local, hematite-rich zones and noting the presence of small-volume, mafic dikes that intruded fault breccia near the end of active uplift on the Pirate fault.

The report includes an annotated satellite image of the Santa Catalina Mountains – Cañada del Oro Basin and a suite of maps showing the distribution of geologic units – alluvium, granites (emplaced between about 70 to 26 million years before the present), and the Pinal Schist, a 1.6 billion-year-old metamorphic rock – that crop out along the fault. 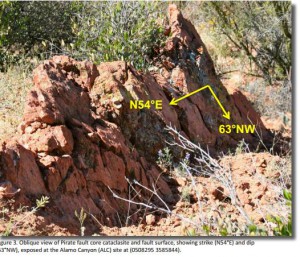 The photo on the left shows an outcrop of the steeply dipping Pirate fault. The photo above shows several faults in the Santa Catalina Mountains including the Catalina detachment fault which forms the scarp on the north side of Tucson.