Last week there was much buzz in the media about a new paper that used fossils from sediment and ice cores to reconstruct global temperatures for the last 11,000 years.

Typical of the headlines was this one from the Arizona Daily Star: “Study: Global heat spike unique in past 11,000 yrs.” The fuss was caused by this paper: “A Reconstruction of Regional and Global Temperature for the Past 11,300 Years” by Marcott et al., published in Science.

The paper’s graph causing all the stir is shown below: 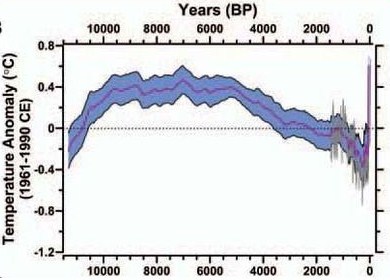 The paper’s abstract contains this sentence: “Current global temperatures of the past decade have not yet exceeded peak interglacial values but are warmer than during ~75% of the Holocene temperature history.” That alone gives the lie to the graph and to the Star’s headline.

A critique of the paper may be found at WUWT here.

Essentially Marcott et al. used Michael Mann’s hockey stick trick to co-join two data sets of very different resolutions to come up with the spike, in other words they joined apples and oranges.

That procedure blurs out the Medieval Warm Period of about 1,000 years ago even though that period was as warm or warmer than current temperatures.

In the WUWT critiques, Robert Rhode, of the Berkeley Earth Surface Temperature Study, explains the problem:

“They rely on proxy data that is widely spaced in time (median sampling interval 120 years) and in many cases may also be subject to significant dating uncertainty. These effects will both tend to blur and obscure high frequency variability. They estimate…that only 50% of the variance is preserved at 1,000-year periods. This amount of variance suppression is roughly what you would expect if the underlying annual temperature time series had been smoothed with a 400-year moving average. In essence, their reconstruction appears to tell us about past changes in climate with a resolution of about 400 years. That is more than adequate for gathering insights about millennial scale changes during the last 10,000 years, but it will completely obscure any rapid fluctuations having durations less than a few hundred years…..one should be careful in comparing recent decades to early parts of their reconstruction, as one can easily fall into the trap of comparing a single year or decade to what is essentially an average of centuries….since their methodology suppresses most of the high frequency variability, one needs to be cautious when making comparisons between their reconstruction and relatively rapid events like the global warming of the last century.”

Additional comments from Dr. Judith Curry, Georgia Tech: “There doesn’t seem to be anything really new here in terms of our understanding of the Holocene.  Mike’s Nature trick seems to be now a standard practice in paleo reconstructions.  I personally don’t see how this analysis says anything convincing about climate variability on the time scale of a century.”

Interestingly, buried in the supplementary material to their paper, Marcott et al. showed the results of running their data through a computer program which used different algorithms and assumptions. This exercise produced a quite different graph from the same data:

That graph is not nearly as scary looking as the one touted in the headlines. This just goes to show that the results depend on the assumptions and methods used in the computer program: Garbage in – Garbage out. Of course, that graph would not garner headlines.

WUWT update post: Marcott et al claim of ‘unprecedented’ warming compared to GISP ice core data.  This update from WUWT graphically shows that the current warmth is not unprecedented as claimed.  The first sentence of Marcott et al. says, “Surface temperature reconstructions of the past 1500 years suggest that recent warming is unprecedented in that time.”  This is clearly false.  Anthony Watts superimposes the Marcott data over an earlier study of Greenland ice core data  to get this graph: 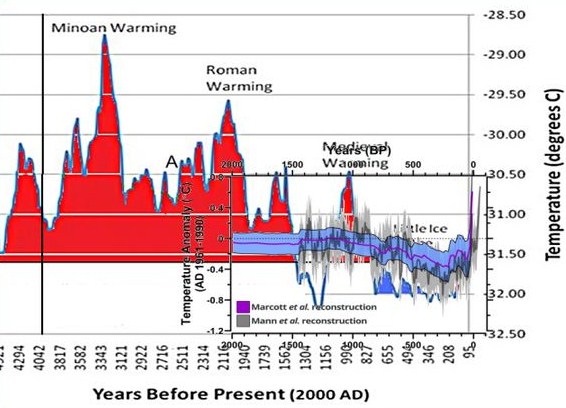 To put things in perspective, look at the following graph, a temperature reconstruction based on ice core data.  Unlike the Marcott paper, this reconstruction shows that current temperatures are among the coolest of the last 10,000 years.  Notice also the previous periods of rapid warming (red lines on the graph).

No Uptick in Marcott Thesis

More evidence that current warming is not unusual