Atmospheric concentration of carbon dioxide temporarily topped the 400ppm mark for a few hours at the Mauna Loa observatory in Hawaii precipitating a media frenzy. Typical of the hype is this story from the New York Times which begins: “The level of the most important heat-trapping gas in the atmosphere, carbon dioxide, has passed a long-feared milestone, scientists reported Friday, reaching a concentration not seen on the earth for millions of years.” There are two errors of fact in that sentence: 1) water vapor is the most important heat-trapping gas, and 2) CO2 concentrations above 400ppm were reported from the 1820s and from the 1940s.

Here is the graph showing the “monumental” event from Mauna Loa: 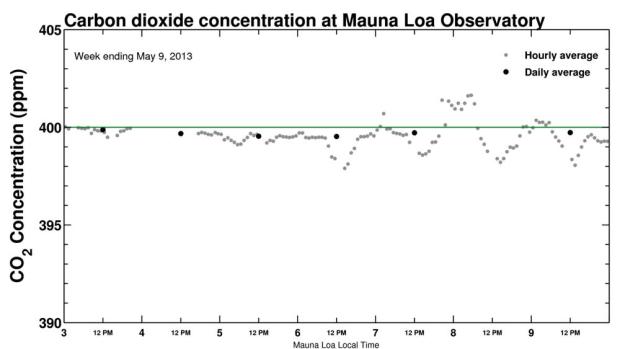 And here is a graph showing analyses from previous research on atmospheric carbon dioxide:

Note that both the modern measurements at Mauna Loa and the older measurements are measuring point sources which may or may not reflect global concentrations. The older chemical methods reported by Beck used a chemical analysis of air captured in flasks. Lest you think that’s too old fashioned, note that NOAA still uses that method to check the Mauna Loa data. “NOAA’s Earth Science Research Laboratory program also measures CO2 in weekly flask samples taken at over 60 remote locations around the world.” (See link below)

The Mauna Loa observatory sits on the flank of an active volcano which “emits variable amounts of carbon dioxide (CO2) and sulfur dioxide (SO2) from fissures at the summit.” NASA explains how scientists attempt to distinguish between carbon dioxide from volcanic emissions and overall atmospheric concentration here.

There is another fly in the ointment reported by Scripps Institution of Oceanography:

“Starting around May 1, we began experiencing intermittent difficulties with the computer used to control the Scripps CO2 analyzer at the Mauna Loa Observatory. This led to delays in providing daily values and also some data gaps. Although such difficulties are not uncommon and rarely lead to significant long-term data loss, we have decided to switch over to reporting daily values from second Scripps instrument, operated in parallel at Mauna Loa…”

Whether or not the atmospheric carbon dioxide concentration has topped a “long-feared milestone” is irrelevant. Carbon dioxide rises as a result of increasing temperature which causes carbon dioxide to exsolve from the oceans and also rises from our increasing use of fossil fuels. For most of Earth’s history carbon dioxide has been well above 1,000ppm and Earth not only survived but life was robust and verdant.

Instead of fearing this artificial milestone, we should celebrate it and try to increase the atmospheric carbon dioxide concentration. For the reason see: A Modest Proposal: Triple Your Carbon Footprint.