Without minerals, we would not have electricity, food, or shelter. Minerals make today’s technology-based life possible, but that’s something many of us take for granted. We want the benefits from those minerals, but some want mining of minerals to be in somebody else’s neighborhood.  The importance of mining has long been recognized:

If we remove metals from the service of man, all methods of protecting and sustaining health and more carefully preserving the course of life are done away with.  If there were no metals, men would pass a horrible and wretched existence in the midst of wild beasts…  -Georgius Agricola, in De Re Metallica, 1556.

For Arizona, it is not just metals.  Arizona produces sand and gravel, limestone for cement production, coal for electrical generation, and a variety of industrial minerals which contribute almost $2 billion to Arizona’s economy (see here).

Arizona has a long history of mining.  There is archeological evidence that cinnabar, coal, turquoise, clay, pigments, and other minerals were mined in Arizona beginning at least 3,000 years ago. (See A History of Mining in AZ by the Arizona Mining Association.)

According to the Arizona Mining Association, Arizona currently produces 68% of domestically mined copper.  With that copper production comes by-product molybdenum, gold, silver, platinum, and rhenium.  Incidentally, The Sierrita Mine south of Tucson is currently the onlydomestic producerof rhenium, a metal used in high-temperature, super-alloy turbine blades for jet aircraft and other land-based turbines.  The Sierrita plant processes output from other mines on a toll basis. It may soon be joined by a second rhenium plant at the Kennecott (Rio Tinto) mine in Utah.

The direct and indirect economic impact of copper mining on Arizona’s economy is about $4.6 billion annually.  That includes $3.2 billion in personal income,  $500 million in state and local government revenues, and 49,800 high-paying jobs for Arizonans. Average labor income of mining company employees (including benefits) is $108,000 per worker vs. $47,000 for all Arizona workers.  If we add in non-metallic, non-fuel, minerals, then Arizona produced about $8 billion worth of mineral products in 2012 according to the U.S. Geological Survey.  Arizona ranks second, after Nevada, in value of total mineral production.  The U.S. total value of mineral production was about $76 billion which supported more than 1.2 million jobs in 2012.

Arizona is endowed with great mineral resources as shown on the map below prepared by the Arizona Geological Survey. 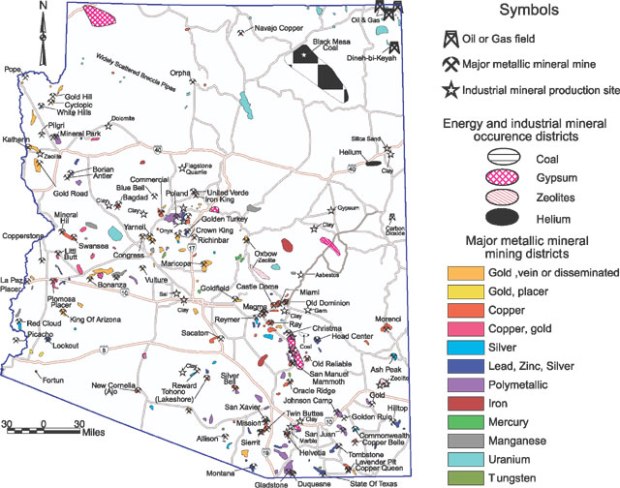 Currently ASARCO and Freeport-McMoRan Copper & Gold are the two biggest copper producers in the state.  ASARCO operates three mines and a smelter. According to the Southern Arizona Business Coalition, in 2012 ASARCO paid wages and benefits of $215.8 million, property, severance, and sales taxes of $47.2 million, and employed 2,198 people in Arizona. Freeport operates mines in Safford, Morenci, Bagdad, Miami, and Sierrita.  They paid wages and operational spending of $860 million in 2012, taxes of $274 million while employing 7,600 people directly and indirectly employing an additional 30,000 people.

In addition to past and current mining, there are many projects on the horizon, some in the exploratory stage, others navigating the byzantine regulatory permitting process.  (See my posts: Mining and the bureaucracy and How NEPA crushes productivity)

Perhaps the largest project is that of Resolution Copper near the town of Superior just west of the famed Globe-Miami mining district and just north of ASARCO’s Ray mine.  This is a bold undertaking because the orebody is 7,000 feet below the surface.  Resolution says that at peak production, this mine will be the largest copper mine in North America, producing over one billion pounds of copper per year.  Resolution estimates that over the 64-year life of the mine, the project will generate $61.4 billion in economic value, provide $20 billion in tax revenues, and provide 3,700 permanent jobs.

The Rosemont copper mine south of Tucson is nearing the end of its long journey through the regulatory maze, and mine construction may begin early next year.  This mine will generate 2,900 Arizona jobs and inject $19 billion into Arizona’s economy and pay $404 million in local taxes over its 20-year projected life.  The mine expects to produce 243 million pounds of copper per year.

Curis Resources is developing an in-situ copper mine near Florence, Arizona.  In this project, instead of mining rock, Curis Resources “seeks to dissolve copper minerals from an underground deposit by introducing water with a lowered-pH (making it slightly acidic).This low-PH, water-based solution dissolves the copper and allows it to be pumped to the surface through a continuous loop water treatment system.”  This deposit, lying 400-to 1200 feet below the surface contains approximately 2.84 billion pounds of copper.

TheI-10 copper deposit, located along Interstate 10 between Benson and Willcox, Arizona, is being investigated as another in-situ copper leaching project by  Excelsior Mining Corporation, a Canadian junior company. They estimate the deposit currently contains an indicated oxide copper resource of 3.21 billion pounds and an additional inferred oxide copper resource of 0.88 billion pounds.

Wildcat Silver Corporation is in the exploration stage of its Hermosa Project which is evaluating the silver-manganese potential in the historic Hardshell mining district near Patagonia in Southern Arizona. Their preliminary economic assessment estimates a measured and indicated resource of 236 million ounces of silver and an inferred silver resource of an additional 79 million ounces.  Project life is estimated at 16 years.  Wildcat estimates that annual production will be 4.1 million ounces of silver, 233,000 tons of manganese carbonate, 20,187 tons of zinc cathode, and 960 tons of copper.

Copper Creek is an old mining district located on the east bank of the San Pedro River and on the western slope of the Galiuro Mountains about 75 miles northeast of Tucson. The property has been acquired by Redhawk Resources, a Canadian junior mining company that plans to develop an underground mine for copper, molybdenum, and silver.  Redhawk estimates a resource of 7.75 billion pounds of copper, 150 million pounds of molybdenum, and 32 million ounces of silver.

The Oracle Ridge mine is a small, underground copper mine in the Santa Catalina Mountains just north of Tucson. The mine was operated intermittently, most recently from 1991-1996. The mine is being developed by a junior Canadian mining company, Oracle Ridge Copper (project website).  The company anticipates employing about 200 people to run the mine which has a projected life of 11 years. The mine will produce 140 tons of concentrate (about 30% copper) a day which will be trucked off the mountain and transported to a smelter.

In northern Arizona, near the Grand Canyon are over 1,300 known or suspected breccia pipes many of which contain uranium oxide as well as sulfides of copper, zinc, silver, and other metals. According to the Arizona Geological Survey, “Total breccia-pipe uranium production as of Dec. 31, 2010, has been more than 10,700 metric tons (23.5 million pounds) from nine underground mines, eight of which are north of Grand Canyon near Kanab Creek.”  This area is mired in fears of contamination of the Colorado River (see Uranium mining and its potential impact on Colorado River water) and a 20-year, million-acre mineral entry withdrawal by the Department of the Interior.

“In 2011, the state of Arizona led the United States in the production of gemstones. Arizona has long been famous as a producer of turquoise, peridot and petrified wood. Gemstones such as azurite, chrysocolla and malachite are associated with the Arizona’s many copper deposits and have a long history of being produced there. Agate, amethyst, garnet, jade, jasper, obsidian, onyx, and opal have all been found in Arizona and used to make gems.” – Geology.com

As you can see, besides currently producing mines, Arizona holds future potential that will add jobs and economic value to the local, state, and national economy – if they can get through the bureaucratic regulatory maze.

Remember, the value of mining is not just the money, it is in providing the products we need to keep our civilization going.  If it can’t be grown, it has to be mined.