Ice-penetrating radar and drilling have led to some surprises in Greenland during the last few years. The continent is bowl-shaped, it has a massive canyon running down its middle, and it contains a large aquifer of liquid water beneath the ice.

NASA’s ice-penetrating radar is interpreted to show that the bedrock of the island is bowl-shaped as shown in the image below. That means that the continental ice sheet is in no danger of slipping into to ocean as some have proposed. 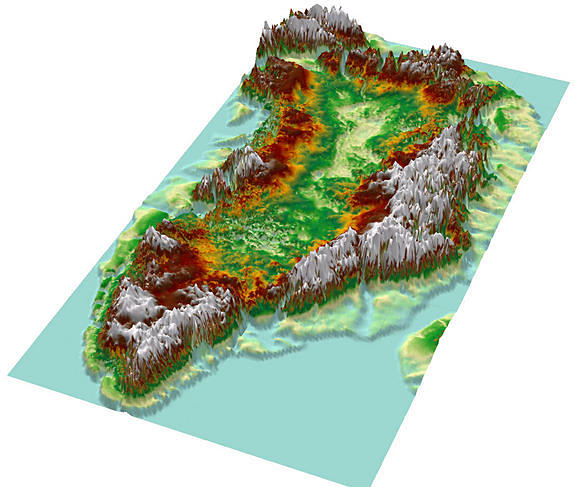 The radar imaging shows a large canyon running down the center of the island (see story from LiveScience.) The canyon starts in the middle of the island and heads northwest to the Petermann Glacier on the coast. The canyon is about 460 miles long, six miles wide, and up to 2,600 feet deep. This canyon must have been carved before the ice sheet formed 1.8 million years ago.

More recently, a giant aquifer of liquid water has been identified below the ice sheet (see story here). This discovery is based upon both NASA’s Operation Icebridge radar data and upon drilling. Researchers estimate that the aquifer covers about 27,000 square miles. The aquifer is apparently fed by meltwater that percolates from the surface during the summer. Researchers speculate that the thick ice and snow cover insulates it and keeps the aquifer from freezing.

But there is another possibility for why the water is not frozen. The Helmholtz Centre Potsdam, GFZ German Research Centre for Geosciences, claims that “The Greenland ice sheet is melting from below, caused by a high heat flow from the mantle into the lithosphere.” “The Greenland lithosphere is 2.8 to 1.7 billion years old and is only about 70 to 80 kilometers thick under Central Greenland.”

Even though the continental ice sheet is confined by topography, there will still be calving from outlet glaciers in fjords along the coast. During the 2000s, there was much media hype about faster than normal calving of these glaciers, but research shows that the rate was similar to that in the 1930s and due to the North Atlantic Oscillation (source).

Geologic evidence suggests that the Greenland ice sheet was at its smallest extent of the last 10,000 years from 3,000- to 5,000 years ago. It was also less extensive about 1,100 years ago when the Vikings colonized western Greenland during the Medieval Warm Period. They were driven out by the subsequent cooling of the “Little Ice Age.”