The new National Climate Assessment report (NCA) is an attempt by the Obama administration to scare us with dire predictions of gloom and doom and thereby justify his climate action plan and ruinous energy policy. It is sad to see such a perversion of science.  Here is a sampling of comments:

Frank Beckmann writes in the Detroit News, “The administration, anxious to continue taxpayer-provided subsidies to politically-favored green energy firms that return the favor with campaign contributions to Democrats, claims it used the expertise of hundreds of ‘experts’ to come up with the findings. A cursory glance of the participants shows no participation by climate realists but leading report authors from environmental political action groups like Second Nature, The Nature Conservancy, Planet Forward, and the misnamed Union of Concerned Scientists, a group that is not made up of scientists at all and which also advocates for unilateral U.S. nuclear disarmament.”

Paul C. Knappenberger of the CATO Institute succinctly sums up the theme of the report in a Washington Times Article: “Let’s get one thing clear: The National Climate Assessment is a political call to action document meant for the president’s left-leaning constituency. What pretense of scientific support that decorates it quickly falls away under a close and critical inspection.”

Dr. Roy Spencer, Principal Research Scientist at the University of Alabama in Huntsville and former Senior Scientist for Climate Studies at NASA’s Marshall Space Flight Center, takes on the NCA point by point here. Among his points are:

“..there is no way to know whether the global warming of the past 50 years is primarily due to human activities [as claimed by NCA, because there is no fingerprint of human-caused versus naturally-caused climate change. To claim the changes are ‘unprecedented’ cannot be demonstrated with reliable data, and are contradicted by some published paleoclimate data which suggests most centuries experience substantial warming or cooling.”

There is “no sign of climate change impacts on agricultural yields. There are always natural fluctuations, but if there is any negative human-induced impact, it is swamped by the increasing yields due to improved agricultural practices, seed varieties, and very likely CO2 fertilization.”

Dr. Judith Curry, Professor and Chair of the School of Earth and Atmospheric Sciences at the Georgia Institute of Technology, comments:

“My main conclusion from reading the report is this: the phrase ‘climate change’ is now officially meaningless. The report effectively implies that there is no climate change other than what is caused by humans, and that extreme weather events are equivalent to climate change. Any increase in adverse impacts from extreme weather events or sea level rise is caused by humans. Possible scenarios of future climate change depend only on emissions scenarios that are translated into warming by climate models that produce far more warming than has recently been observed.”

The National Climate Assessment claims that effects of global warming are already happening and causing increases in extreme weather events and wildfires. Well, let’s look at the data.
Wildfires: Data from the National Interagency Fire Center shows that the number of wildfires has been steadily decreasing since 1960. The number of acres burned, however, has been increasing since about 1995 due in part to changes in forest management under the Endangered Species Act. For more details see Wildfires and Warming.
Heatwaves: Looks like the 1930s surpass any we’ve experienced recently. 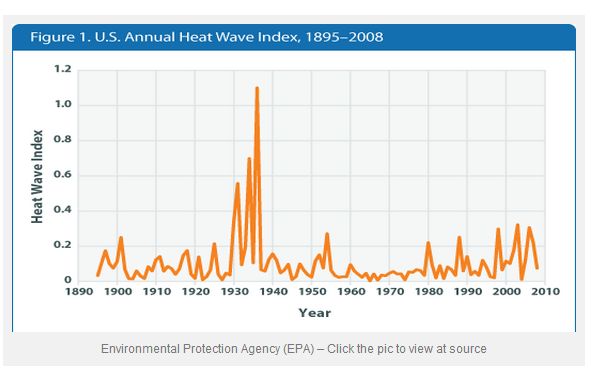 Unusually wet weather: No trend since 1900

Hurricanes: Variable, but decreasing trend since 1993

For more data on extreme weather see the WUWT extreme weather page.
The National Climate Assessment also worries about sea level rise, although sea level has been rising naturally for the past 18,000 years. The rate of sea level rise is cyclical on decadal and multi-decadal time scales, but overall, the rate is decreasing even as the planet warms, (see Sea Level Rising?).

For real, peer-reviewed science, see Climate Change Reconsidered II (CCR-II), an independent, comprehensive, and authoritative report on the current state of climate science. It is produced by the Nongovernmental International Panel on Climate Change (NIPCC), an international network of climate scientists sponsored by three nonprofit organizations: the Science and Environmental Policy Project, Center for the Study of Carbon Dioxide and Global Change, and The Heartland Institute.

UPDATE: Dr. Don J. Easterbrook takes the NCA apart by showing how the assertions and claims have no basis in fact.  Easterbrook concludes:

How well do the NCA assertions compare with real data? As can be seen from the data above, they diverge wildly from real data. The report is filled with wild distortions and outright fabrications. If we apply Feynman’s scientific method (if an assertion disagrees with observations or data, it is wrong) to the NCA report, we can only conclude that the report fails badly. One can only wonder why the so-called scientists who wrote the report could possibly justify making such unsupported assertions contrary to hard data.

A substantial part of the report emphasizes weather events (drought, hurricanes, tornadoes, storms, etc). The authors don’t seem to know the difference between weatherand climate. None of the ‘extreme events’ they cite have any meaning whatsoever to climate. Single weather events can happen at any time, regardless of the climate.

The authors also don’t seem to be able to distinguish cause-and-effect relationships from artificial scenarios. They frequently point to ‘global warming’ as if that somehow proves it was caused by CO2,totally ignoring vast amounts of data showing that CO2 always lagswarming, even on a short term basis. If CO2 lags warming, it can’t be the cause of the warming!

The most obvious shortcoming of the NCA report is all of the assertions that are contrary to hard data. But the report is also weakened by the wholesale ignoring of relevant data. Rather than discussing data and justifying their assertions, the authors simply disregard any data that doesn’t fit their scenarios.

From these observations, one can only conclude that the report is really not a scientific document at all, but rather a huge political propaganda effort.   Read full post here.