Or maybe it’s just bad writing. A front page story in the Arizona Daily Star (June 7, 2014) claims “Southwest summers heating up the most nationally, analysis finds.” This story is based on an analysis by the Associated Press (AP).

The story is internally confusing:

And some meaningless statistics:

“The average Arizona summer is now 2.4 degrees warmer than in 1984, giving it the fourth fastest summertime increase among the lower 48 states.”

“Arizona’s annual average temperature has risen 1.5 degrees in that period [since 1984]— the 18th fastest increase among the lower 48 states. Tucson’s average annual temperature rose 1.1 degrees in the past 30 years.”

The conclusion from this study represents statistical misfeasance by the AP. The problem is explained by Sierra Rayne in an American Thinker article “Ignoring Statistical Significance to Promote Climate Alarmism”:

“The AP used ‘the least squares regression method’ to calculate the annual temperature trend for all these regions, but then proceeded to ignore entirely whether the regression method indicated if the trend was statistically significant (the typical criteria would be a p-value<0.05).”

“This is first-year statistics level stuff. Quite simply, if your statistical test (“least squares regression method”) tells you the trend isn’t significant, you cannot claim there is a trend, since the null hypothesis (i.e., no trend) cannot be rejected with any reasonable degree of confidence.”

Rayne also pointed out that 80 of the sites used by the AP analysis did not have complete records for the period in question.

There are some other inconvenient facts apparently ignored by the AP study:

Much of our temperature record is warm-biased because of the Urban Heat Island effect (UHI). Concrete and asphalt in cities absorb heat and re-radiate it, especially at night. This makes cities warmer than surrounding rural areas. For instance, the chart below compares the temperature record of Tucson with that of Tombstone. Tucson shows a distinct warming trend while Tombstone shows no trend.

Another inconvenient fact is that the federal government has been “adjusting” the temperature record to make the past look cooler and more recent times look warmer. See my ADI story: “The past is getting cooler.”

For the globe as a whole the UAH satellite temperatures show that there was no trend from 1979 to 1998, then a super El Nino phase shift stepped up the temperature, but there has no trend since 1999 even though we have continued to pump carbon dioxide into the atmosphere. 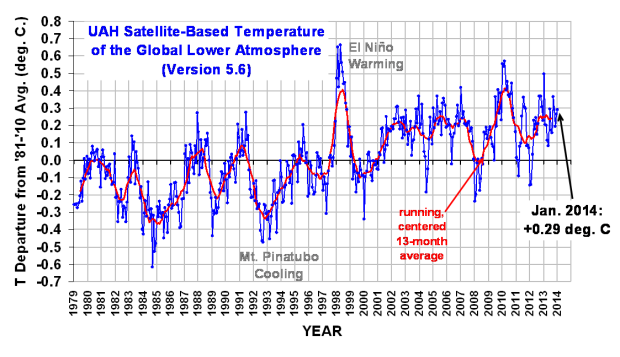 My take on the Star/AP story is that it is just more alarmist propaganda to support the totally misguided federal policy on climate change and energy use.

Raynes points out that the AP story claimed “92 percent of the more than 500 cities and smaller regions within states have warmed.” However proper statistical analysis shows that only 31 percent of those regions have significant warming trends since 1984.

Yes, it must be the heat.