Gopher snakes are large, heavy-bodied snakes that often pretend to be rattlesnakes. They are commonly four to five feet long but can get to over nine feet long. Gopher snakes are non-venomous and good to have around because they eat rodents.

At the Arizona-Sonora Desert Museum, keepers removed one gopher snake from the prairie dog enclosure that measured nine feet, two inches long. Guess what it was eating.

Gopher snakes vary in color but are usually yellowish, cream-colored, or tan with many black, brown or reddish blotches on their backs. Check out the top photo here to see the full length pattern. Pretty isn’t it. The scales on their back are ridged rather than smooth.

When disturbed, gopher snakes will hiss, flatten their heads, and vibrate their tails. Because of this behavior and their color pattern, they are often mistaken for rattlesnakes. As you can note from the photos below, gopher snakes have round-pupils whereas rattlesnakes have slit pupils like cat’s eyes. 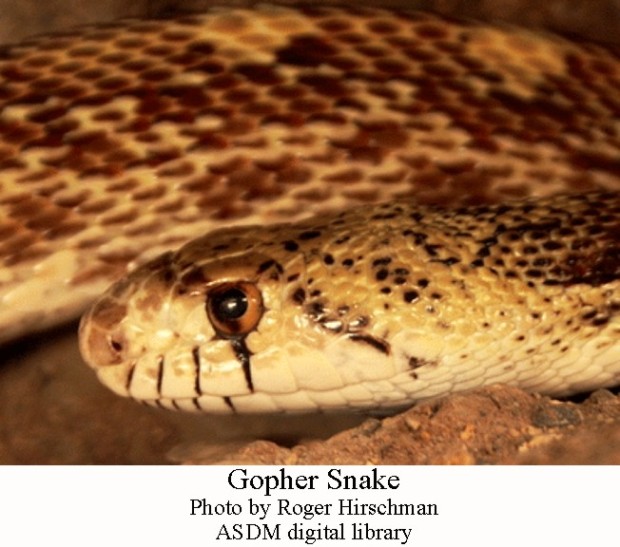 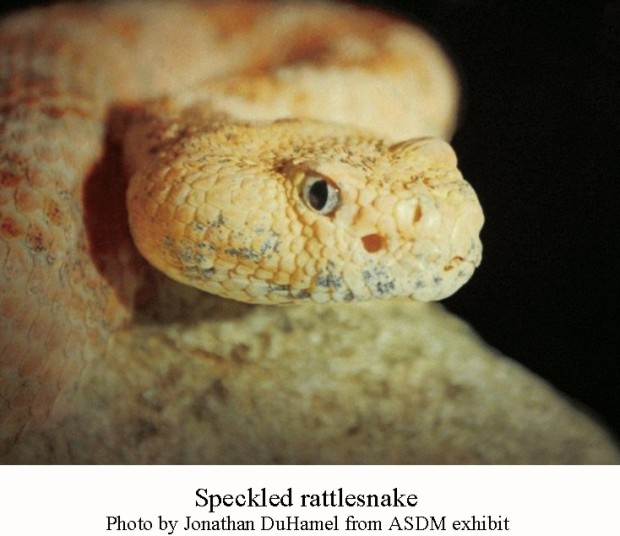 All you have to do is get close enough to look them in the eye to tell the difference.

Gopher snakes have a large range: all of the U.S., southern Canada, and as far south as southern Sinaloa in Mexico. These snakes can be found in deserts, prairies, woodlands, brushlands, (and in my yard), from sea level to over 9,000 feet. They are called bull snakes or pine snakes in some parts of the country.

Gopher snakes are non-venomous constrictors. They hunt during the day except in very hot weather, when they become night hunters. Their prey includes rodents, young rabbits, lizards, birds, bird eggs, other snakes, and yes, gophers. They hunt mainly by sense of smell. Gopher snakes are good climbers and can even climb a large saguaro cactus to check out what might be inhabiting those holes made by woodpeckers. Apparently their tough scales protect them from the spines.

According to the Arizona-Sonora Desert Museum, “Male gopher snakes engage in ritualistic combats during the spring mating season. The combatants remain on the ground, entwined from tail to neck. Each tries to maintain its head and body position, although occasionally they will exert so much force that they roll. Hissing frequently, they rarely bite one another. Presumably the combat ritual is a means of determining the sexual fitness of a male, for usually only the victor will copulate afterwards.” I understand that this combat is performed when a female is nearby.

I have seen similar behavior with rattlesnakes, but instead of remaining on the ground, the ones I saw were intertwined vertically for almost half their length.

The female will lay up to 24 eggs, in the summer, which hatch in the fall.

If you see a gopher snake in your yard, let it be. It may do you the service of eating your pack rats, then move on.

A version of this article first appeared in the Arizona Daily Independent.