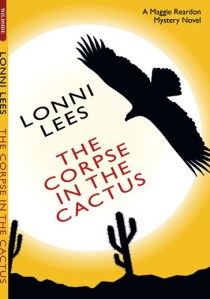 This article is a book promotion for a new murder mystery by Lonni Lees, my wife. The book is titled The Corpse in the Cactus.

Tucson police detective Maggie Reardon is back, in the sizzling sequel to The Mosaic Murder!

The murder that Detective Maggie Reardon just solved at a local Tucson art gallery has already created repercussions, complicating her life both legally and personally. Her new lover dropped to second place when a new man entered the picture. A dead man whose body had been found at The Arizona-Sonora Desert Museum lying under a bed of cactus. What at first appeared to be a tragic accident was quickly starting to smell like murder.

Losing wasn’t her game, but she’s been dealt a nameless victim with no witnesses, no suspect, and no apparent cause of death. As the evidence unfolds, Detective Reardon battles a hostile fellow cop, determined to see her lose her badge.

The mixture adds up to a scorching southwestern recipe guaranteed to sear your taste buds — but leave you begging for more!

The Corpse in the Cactus is available from Amazon and Barnes & Noble.

By Terry Butler on March 23, 2015
For this reader one of the great pleasures of reading P. I. or Police Procedural novels in series is the opportunity to move along with a good writer as she develops the character of her protagonist and those close to that person. That’s why I was so glad to see that up-and-comer Lonni Lees has continued to flesh out the intriguing character from 2012’s “The Mosaic Murder”–Detective Maggie Reardon of the Tucson P.D.
And this book is even more compelling than the first book in the series, because as Ms. Lees has deepened our attraction to a believable and likeable cop with a heart, she now provides Det. Reardon with a lightly drawn but troubling back story that promises a more complex psyche than is at first apparent. Something powerful happened to Maggie to form her toughened vulnerability somewhere along the line and I want to know what it was!
Lees has also pared down and sharpened her mystery this time, making it more puzzling–and ultimately more satisfying– than most of the tired tropes and standard plots we have to plow through while looking for a gem like this. This time we also have a few dark and somehow interconnected weirdos inhabiting a sort of parallel world in the darker corners of Tucson. Ms Lees brings to this underground some of the ways with horror stories that she displayed in earlier books like 2011’s “Deranged” and in some of the short stories she’s published online in magazines like Yellow Mama (where she also does illustration work) to add to the mystery in front of us.
There’s a bit of Jim Thompson here, some Stephen King too, but much more Lonni Lees than anyone else
When I got my copy from Amazon I was going to crack it and see where it would go in my book pile; on the table in my workroom or the nightstand next to the bed. I ended up in a comfy chair in the living room pleasurably ingesting the first three chapters before I had to get back to the real world. I finished the book in short order though, and it was a joy to read, reading in bed as a cap to my day. I like shorter books that get to the story right away, that don’t try to trick you or make you read lots of detail–books that fit Elmore Leonard’s parameters in his Ten Rules of Writing (Google it!)
This one is a good example of that kind of storytelling. I highly recommend it.

And check out Lonni’s other books as well as those of her sister Arlette Lees, a talented author and painter in her own right.

Besides The Mosaic Murder, linked above, Lonni’s first novel, Deranged, is about a serial killer who meets his match. This book won a first place award from PSWA a professional association of writers, forensic experts, police and firefighters. Lonni also has an anthology of her noir-style short stories in the book called Crawlspace. One of the stories in this collection, The Blue-eyed Bandit, also won an award from PSWA.

Lonni’s story “The Confessor” online at Shotgun Honey won First Place as well as Grand Prize from PSWA. Take a look at The Confessor for a short taste of noir.

If you are a fan of murder mysteries, give both The Mosaic Murder and The Corpse in the Cactus a try. If you like sheer horror and suspense, try Deranged.