The myth of the much-quoted 97% consensus comes, most recently from a paper by John Cook: “Quantifying the consensus on anthropogenic global warming in the scientific literature.”

I discuss that paper in a Wryheat post “Cooking Consensus on Climate Change.”

John Cook, proprietor of the grossly mis-named website, SkepticalScience, published a study in which he claims, “A new survey of over 12,000 peer-reviewed climate science papers by our citizen science team at Skeptical Science has found a 97% consensus among papers taking a position on the cause of global warming in the peer-reviewed literature that humans are responsible.” The gullible press took that to mean that 97% of the 12,000 papers supported the contention that humans were responsible for most global warming.

Delving into that paper, we find that out of 11,944 peer-reviewed papers examined, only 64 papers (0.5%) explicitly endorsed and quantified AGW as being greater than 50% of warming. Another 922 papers (7.7%) explicitly endorse AGW but do not quantify the percentage of warming. That means that just 8.2% of “climate scientists” actually say that carbon dioxide emissions play a significant role in driving global temperature. Another 2,910 (24.4%) implicitly endorse AGW, but that alleged endorsement is a subjective call by the reviewer. That adds up to 32.6% of papers endorsing AGW, not 97%. All the other papers took no position or rejected AGW.

There data are presented graphically here: 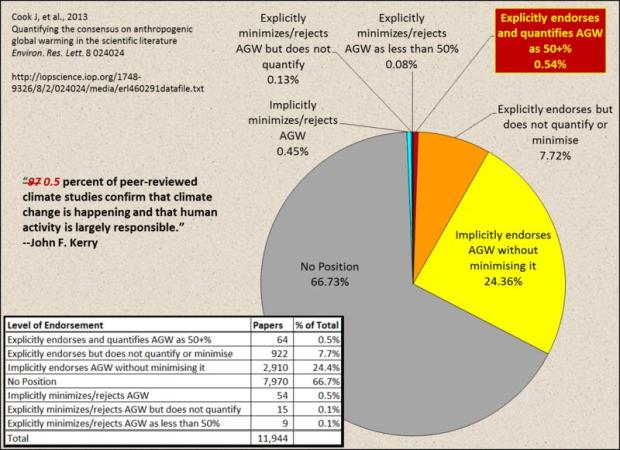 So, out of 11,944 peer-reviewed papers examined only 8.2% explicitly endorse AGW. It takes much cherry picking to conflate that into “97% of climate scientists.”

The graphic comes from an essay by David Middleton : “Science Lessons for Secretary of State John F. Kerry.”

The alleged 97% consensus is debunked, but, even if 97% of climate scientists supported AGW it still would not make it true because it is not demonstrable with physical evidence. For more on consensus, see my article “On Consensus in Science.”

And remember, consensus is “the first refuge of scoundrels” – Michael Crichton.

A broad survey of climate change literature for 2017 reveals that the alleged “consensus” behind the dangers of anthropogenic global warming is not nearly as settled among climate scientists as people imagine.

Author Kenneth Richard found that during the course of the year 2017, at least 485 scientific papers were published that in some way questioned the supposed consensus regarding the perils of human CO2 emissions or the efficacy of climate models to predict the future.

According to Richard’s analysis, the 485 new papers underscore the “significant limitations and uncertainties inherent in our understanding of climate and climate changes,” which in turn suggests that climate science is not nearly as settled as media reports and some policymakers would have people believe.

Richard broke the skeptical positions into four main categories, with each of the individual papers expounding at least one of these positions, and sometimes more.

N(1) Natural mechanisms play well more than a negligible role (as claimed by the IPCC) in the net changes in the climate system, which includes temperature variations, precipitation patterns, weather events, etc., and the influence of increased CO2 concentrations on climatic changes are less pronounced than currently imagined.

N(2) The warming/sea levels/glacier and sea ice retreat/hurricane and drought intensities…experienced during the modern era are neither unprecedented or remarkable, nor do they fall outside the range of natural variability, as clearly shown in the first 150 graphs (from 2017) on this list.

N(3) The computer climate models are not reliable or consistently accurate, and projections of future climate states are little more than speculation as the uncertainty and error ranges are enormous in a non-linear climate system.

N(4) Current emissions-mitigation policies, especially related to the advocacy for renewables, are often ineffective and even harmful to the environment, whereas elevated CO2 and a warmer climate provide unheralded benefits to the biosphere (i.e., a greener planet and enhanced crop yields).

Below are the two links to the list of 485 papers as well as the guideline for the lists’ categorization.