I write about the chain-fruit and teddy bear cacti together because both are called “jumping chollas” or “jumping cactus.” Of course, they don’t actually jump at you, but if you happen to brush against them, even slightly, they become very attached to you. Both cacti propagate mainly by clonal rooting of joints or fruit.

The chain-fruit cholla (Opuntia fulgida or Cylindropuntia fulgida) is so called because new fruits grow from aureoles on older fruit. The aureoles contain stem cells which can give rise to branches or buds.

Chain-fruit cholla range throughout south-central Arizona and northern Sonora. They may have several trunks and grow to about eight feet high on average, but can get over 12 feet high. The stem and fruits are green. Purplish-pink flowers usually open in the afternoon during the summer. The fruit and flowers generally hang down from branches.

The fruits may contain viable seeds, but more often fallen fruit takes root in clonal asexual reproduction. This cactus tends to form dense clonal colonies on the finer soils of bajadas and valleys.

The not so cuddly teddy bear cholla (Opuntia biglovii or Cylindropuntia biglovii) is so called because in certain light, its dense yellow spines (which are barbed) appear fuzzy. The teddy bear cholla has a single trunk, three to five feet high, with densely-packed side branches on the upper part of the plant. Yellow-green flowers give rise to spineless fruit that usually contain no fertile seeds. The teddy bear cholla survives in the warmest parts of the Mohave Desert and the hotter, drier parts of the Sonoran Desert. This cactus seems to prefer rocky habitat. 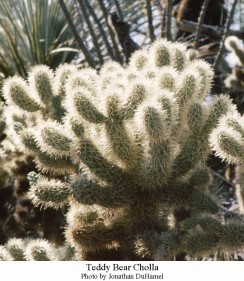 According to the Arizona-Sonora Desert Museum:

“The detached joints will readily generate new plants by rooting and branching. During cooler months, the terminal joints are detached by a slight touch by a passing animal or even a strong wind. “

There are many myths associated with “jumping” cactus. According to ASDM:

“One myth is that the joints are attracted to the moisture in animal flesh. Many people believe that they really do jump, and some even claim to have caught them in the act. The truth is that the very sharp spines are so well-barbed that even if one barely penetrates the skin or clothing, its grip is stronger than the connection between joints. If you pass a jumping cholla and turn to look when you feel a tug on your clothing, you may see the joint detaching and flying through the air as the elastic recoil of the cloth snaps it into your flesh. The double surprise of seeing a plant moving faster than you and the sharp pain of impalement leaves a lasting impression.”

“The easiest way to remove a cholla joint is to place a comb between it and your skin and quickly jerk it away. Because of the barbs, it will take considerable force to dislodge it, and the joint may fly several feet. Make sure a hapless companion is not in the line of fire.”

The fruit of both chollas generally does not ripen. Cactus wrens make use of these cacti for nesting sites, and pack rats use the joints to fortify their dens.

See the Article Index for more stories on desert plants.