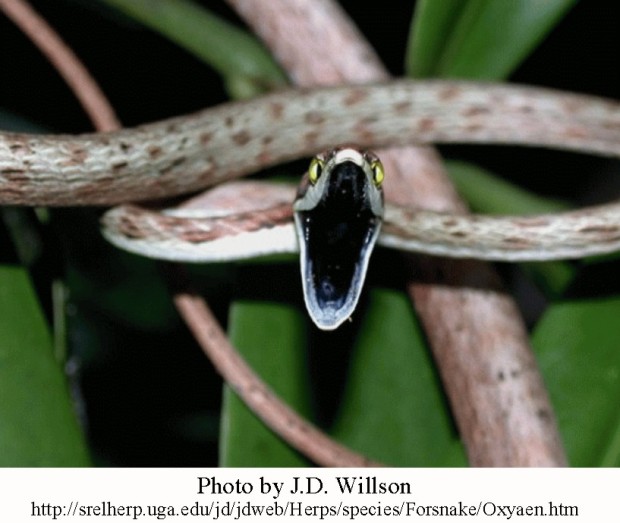 The Mexican vine snake (Oxybelis aeneus), aka Brown vine snake, is a very slender snake that typically gets three to six feet long. It has a pointed snout and the head length is about three to four times its width. They are masters of camouflage. The Arizona-Sonora Desert Museum has a small one on exhibit in the reptile room. Click here to see a photo of a large one taken in Santa Cruz County, Arizona. 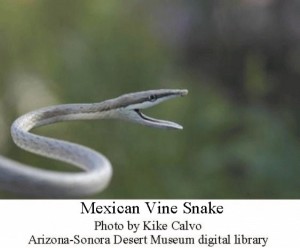 Vine snakes are usually gray to brown on the upper side and have yellowish undersides. The snout is elongated and the mouth can open very wide. This snake is active during the day and often hunts in trees. Its main prey are lizards, frogs, and birds.

The vine snake is a mildly venomous, rear-fanged snake, but it is not considered dangerous to humans. However, a bite can cause an itching sensation. When threatened it will often hold its mouth open widely exposing the dark lining of the oral cavity and throat (see third photo here). Also when threatened, it sometimes releases foul smelling secretions from its vent. Farting is a defense.

According to Arizona Game & Fish, the vine snake lays a clutch of 3-5 eggs in late spring to early summer in an underground burrow or den. Incubation lasts about 2.5 months.

According to a paper, Van Devender et Al,, Factors Influencing the Distribution of the Neotropical Vine Snake (Oxybelis Aeneus) In Arizona and Sonora, Mexico :

“In southern Arizona and northern Sonora, the neotropical vine snake (Oxybelis aeneus) lives in temperate oak woodland, canyon riparian woodland, desert-grassland, and pine-oak woodland communities at 1160 to 1650 m [3800 to 5400 feet] elevation. Perennial plants in an oak woodland habitat in the Atascosa Mountains in the center of the Arizona distribution of the species, have strong biogeographical affinities with the grasslands and woodlands of the southwestern United States and the northern Sierra Madre Occidental in Mexico. The plant communities are wholly different in vegetation structure and only 2.2% of the Atascosa site perennials reach tropical lowlands near Alamos in southern Sonora. The restricted area occupied by 0. aeneus in southern Arizona is characterized by relatively mild winter temperature and relatively high annual precipitation that falls mainly as summer monsoon rain. The northerly limit of O:xybelis in southern Arizona is apparently limited by winter freezing above 1650 m and by summer aridity below 1160 m. The northward range limit is associated with final failure of tropically-evolved morphology. physiological tolerances, and behavior under continental physiographic-climatic constraints.” (Read full paper)

According to the Tucson Herpetological Society vine snakes sleep in loose coils in trees and shrubs at least six feet off the ground. “They have been observed from March into November in our area, although most are found during the summer rainy season. The vast majority of records are for the Pajarito-Atascosa Mountain range complex, from about Walker Canyon east to Arivaca Lake and Ruby. A specimen was collected in 1968 from ‘near Washington Camp’ in the Patagonia Mountains. There are at least four unconfirmed (no photos or specimens) reports from the western flank of the Santa Rita Mountains (Montosa Canyon and Agua Caliente Cave), and a similarly unconfirmed report from Thomas Canyon on the eastern slope of the Baboquivari Mountains.”

[Credit: the “head-on” photo above was taken by Dr. John Willson, now Assistant Professor Department of Biological Sciences, University of Arkansas, who kindly gave me his permission to use the photo. The photo was taken in Costa Rica.]

The Coachwhip a colorful snake