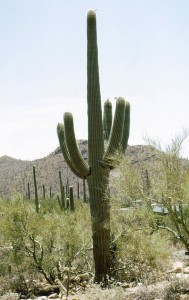 The Arizona Daily Independent recently ran an article entitled “Cacti “Guts” Can Purify Contaminated Water” which reported on new research about using cactus mucilage to remove contaminants in water. That lead me to review the basics of plant metabolism and how that metabolism has evolved to deal with the environment.

All plants carry out two basic and opposite chemical reactions: respiration and photosynthesis. During respiration, carbohydrates are oxidized to water, carbon dioxide and energy. Written as a formula, this would be Carbohydrate + O2 >> H20 + CO2 + Energy.

During photosynthesis, water, carbon dioxide, and energy become carbohydrates plus oxygen: H20 + CO2 + Energy >> Carbohydrate + O2. The energy for this reaction comes from sunlight which is captured by chlorophyll and stored as stable chemical energy.

Photosynthesis in about 90% of plants produces a 3-carbon sugar as the first stable product. In botanical terminology, these are called C3 plants. About 3% of plants produce a 4-carbon sugar and hence are called C4 plants. C4 plants use carbon dioxide more efficiently than C3 plants and lose less water through evapotranspiration. C4 plants can grow faster than C3 plants at high temperatures. C4 plants include most summer grasses in warm climates, many weeds, and some important crops such as corn, sorghum, and sugar cane.

Cacti and other succulents use a more extreme metabolic process called Crassulacean Acid Metabolism (CAM) to supplement the respiration and photosynthesis process. About 5% of plants use CAM.

In succulents, water is stored in leaves, stems, or roots and in the plant “flesh.” Water is bound into extracellular mucilages that hold onto water very tightly.

CAM plants keep their stomates (pores) closed during the hot day to prevent water loss via evapotranspiration. Their stomates open at night to take in carbon dioxide. But since there is no sunlight to provided the energy for photosynthesis, the carbon dioxide is stored as an organic acid for use the next day. CAM plants lose about one-tenth the water through evapotranspiration compared to C3 plants. CAM works best when the diurnal temperature variation is large such as in the Sonoran desert where it is common to have a 25- to 30 degree (F) difference between the high temperature of the afternoon and low temperature every night. Under extreme drought conditions, CAM plants keep their stomates closed both day and night. Their metabolism slows to using moisture within plant tissues and carbon dioxide released by respiration is recycled into the photosynthesis process.

Some plants, such as agavi deserti, can switch between CAM and C3 metabolism depending upon the abundance of water. Idling CAM plants can resume full growth within 24- to 48 hours of a rain. Agaves can sprout new roots within 5 hours after a rain according to the Arizona-Sonora Desert Museum.

Desert-adapted plants use other strategies as well. For instance, mesquite trees have very deep roots that can tap groundwater sources making them less dependent on rain. Have you noticed that many leafy desert plants have relatively tiny leaves? Many tiny leaves have a higher surface area to volume ratio compared to a large, broad leaf. That allows the plant to be a better radiator of heat. The Foothills Palo Verde is the extreme example of this. Even oak trees in our region have small leaves compared to those of more temperate climates. Another adaptation is that leaves may be grayish rather than deep green. This reflects light better and keeps the plant cooler. Some plants, such as Prickly Pear cactus and Jojoba have a vertical orientation of their pads or leaves. This orientation allows them to get more direct sunlight in the cooler early mornings or late afternoon rather than in the hottest part of the day. Photosynthesis is more efficient during these cooler times.