It has been a tenet of the UN’s “authoritative consensus” that global warming will cause more extremes in weather such as dry areas becoming drier and wet areas becoming wetter. (Amazing, isn’t it how global warming can cause both drought and extreme rainfall?) Alas, a new study compared the rainfall/drought conditions of the 20th Century to the past 1,200 years in the Northern Hemisphere and found that extremes of rainfall and drought were much more prevalent in both warmer and cooler periods of the past. The study was based upon geologically preserved evidence of stream flow, lake levels, marine and lake sediments, tree rings, and historical records. Could it be that something other than CO2 and temperature is causing these conditions?

Here is a summary of the paper written by the authors (edited for readability):

Accurate modeling and prediction of the local to continental-scale hydroclimate response to global warming is essential given the strong impact of hydroclimate on ecosystem functioning, crop yields, water resources, and economic security. However, uncertainty in hydroclimate projections remains large, in part due to the short length of instrumental measurements available with which to assess climate models.

Here we present a spatial reconstruction of hydroclimate variability over the past twelve centuries across the Northern Hemisphere derived from a network of 196 at least millennium-long proxy records. We use this reconstruction to place recent hydrological changes and future precipitation scenarios in a long-term context of spatially resolved and temporally persistent hydroclimate patterns.

We find a larger percentage of land area with relatively wetter conditions in the ninth to eleventh and the twentieth centuries, whereas drier conditions are more widespread between the twelfth and nineteenth centuries. Our reconstruction reveals that prominent seesaw patterns of alternating moisture regimes observed in instrumental data across the Mediterranean, western USA, and China have operated consistently over the past twelve centuries.

Using an updated compilation of 128 temperature proxy records, we assess the relationship between the reconstructed centennial-scale Northern Hemisphere hydroclimate and temperature variability. Even though dry and wet conditions occurred over extensive areas under both warm and cold climate regimes, a statistically significant co-variability of hydroclimate and temperature is evident for particular regions. We compare the reconstructed hydroclimate anomalies with coupled atmosphere–ocean general circulation model simulations and find reasonable agreement during pre-industrial times. However, the intensification of the twentieth-century-mean hydroclimate anomalies in the simulations, as compared to previous centuries, is not supported by our new multi-proxy reconstruction. This finding suggests that much work remains before we can model hydroclimate variability accurately, and highlights the importance of using palaeoclimate data to place recent and predicted hydroclimate changes in a millennium-long context.

These results should not be a surprise to those who deal with real data rather than output of computer models.

For instance, in the paper: Verosub, K. 2015. Don’t worry about climate change; California’s natural climate variability will probably “get us” first. Quaternary International 387: 148, the author reports that “at least once and probably several times in the last few thousand years, there have been droughts severe enough to drop the level of Lake Tahoe by several tens of meters, which allowed Douglas fir trees to grow to maturity on exposed lake beds.” Furthermore, other data indicate episodes of extreme flooding, such as the water year of 1861-1862 that brought extensive rainfall from Oregon down through southern California and “given the historic periodicity of these events, there would be no way to prove that they weren’t natural. (source)

By the way: The frequency of 90 degree days and 100 degree days has plummeted across most of the US since the 1930’s, see graphs. 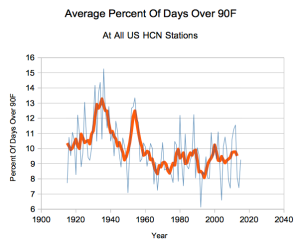 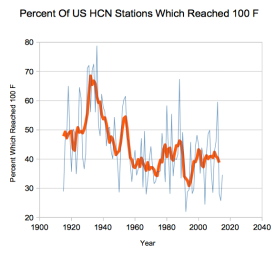