A spineless variety of prickly pear cactus (Opuntia ficus-indica) which originated in Mexico, is now widely used world-wide to provide food for livestock and humans. This cactus goes by various names which include Indian fig and Barbary fig. In Mexican usage, the fruit is called a “tuna” and the plant pad is called “nopal.” The Indian fig can get to as much as 15 feet high and 10 feet wide. Flowers are yellow to yellow-orange.

According to an article in the American Journal of Botany, “Opuntia ficus-indica is a long-domesticated cactus crop that is important in agricultural economies throughout arid and semiarid parts of the world. The biogeographic and evolutionary origins of this species have been obscured through ancient and widespread cultivation and naturalization… the center of domestication for this species is in central Mexico.”

According to the Arizona-Sonora Desert Museum, writing of Opuntia in general:

“Opuntias are extensively used for food and other purposes by humans. The flesh of some species is edible and tasty. It can be eaten fresh, if care is taken to avoid the glochids on the rind. More often the brilliant red-purple and distinctly-flavored juice is expressed to make drinks, syrup, and jelly. Some prickly pear species are commercially cultivated for fruit production; numerous superior cultivated varieties have been selected.”

“Millions of people cook and eat the tender young pads of several species of prickly pear. Besides being more tender, immature pads have less oxalic acid, which could be toxic in large amounts. Nopales (the edible species of prickly pear and the harvested whole pads of the same) are very nutritious. Nopalitos (small pads that are cut into bite-size pieces) are mucilaginous like okra, and good for thickening broths. The mucilage also helps control blood-sugar levels associated with adult-onset diabetes. Diabetes is a common affliction among native Americans who adopt Western high-fat, low-fiber diets. There is also clinical evidence that nopales reduce blood cholesterol.” 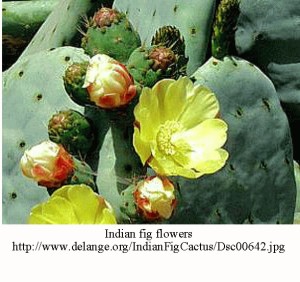 Cactus (Opuntia ficus-indica) has been used in traditional folk medicine because of its role in treating a number of diseases and conditions, including diabetes, hypertension, hypercholesterolemic, rheumatic pain, gastric mucosa diseases and asthma, in many countries over the world. (Source) According to WebMD, “Prickly pear cactus is used for type 2 diabetes, high cholesterol, obesity, alcohol hangover, colitis, diarrhea, and benign prostatic hypertrophy (BPH). It is also used to fight viral infections.”

According to the journal Molecules : “In the last decade, compelling evidence for the nutritional and health benefit potential of this cactus has been provided by academic scientists and private companies. Notably, its rich composition in polyphenols, vitamins, polyunsaturated fatty acids and amino acids has been highlighted through the use of a large panel of extraction methods. The identified natural cactus compounds and derivatives were shown to be endowed with biologically relevant activities including anti-inflammatory, antioxidant, hypoglycemic, antimicrobial and neuroprotective properties.”

This article goes into detail of uses of various parts of the plant.

I have this plant in my back yard. It started as a single potted plant given to me by a friend. It is now five separate plants six to eight feet high and two potted plants about three feet high.