When one thinks of earthquakes in the U.S., we often think of the west coast. But, on a U.S. earthquake hazards map, there is a big bull’s eye in the Midwest along the Mississippi River, centered on the town of New Madrid, Missouri. According to the U.S. Geological Survey (USGS) this area, the New Madrid seismic zone has “ repeatedly produced sequences of major earthquakes, including several of magnitude 7 to 8, over the past 4,500 years.”

The most famous New Madrid earthquakes occurred from December 16, 1811, through February 7, 1812. The three main earthquakes measured 7.3-7.5 on the Richter scale. Aftershocks persisted through 1813. 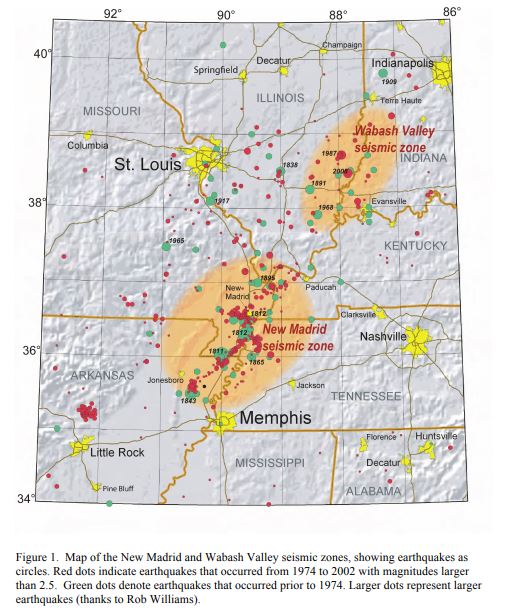 According to the USGS:

This powerful earthquake was felt widely over the entire eastern United States. People were awakened by the shaking in New York City, Washington, D.C., and Charleston, South Carolina. Perceptible ground shaking was in the range of one to three minutes depending upon the observers location. The ground motions were described as most alarming and frightening in places like Nashville, Tennessee, and Louisville, Kentucky. Reports also describe houses and other structures being severely shaken with many chimneys knocked down. In the epicentral area the ground surface was described as in great convulsion with sand and water ejected tens of feet into the air liquefaction).

During the February 7 earthquake, “Large waves (seiches) were generated on the Mississippi River by seismically-induced ground motions deforming the riverbed. Local uplifts of the ground and water waves moving upstream gave the illusion that the river was flowing upstream. Ponds of water also were agitated noticeably.”

The New Madrid seismic zone is underlain by the Reelfoot Rift, a large fault zone with mainly horizontal movement. It is speculated that this rift was formed about 750 million years ago during the breakup of the supercontinent Rodinia. The Reelfoot Rift failed to split the continent, but remains a weak area in Earth’s crust. From time to time, pressure from the movement of tectonic plates causes movement on this weak area resulting in earthquakes.

The USGS “concludes that the New Madrid Seismic zone is at significant risk for damaging earthquakes that must be accounted for in urban planning and development. A fundamental problem is the lack of knowledge concerning the physical processes that govern earthquake recurrence in the Central US, and whether large earthquakes will continue to occur at the same intervals as the previous three clusters of events. ”

To read more, including eyewitness accounts, and a summary of 1811-1812 New Madrid earthquakes sequence, go to:

Where the Next Big American Earthquake and Tsunami Might Occur

The Great Arizona-Sonora Earthquake of 1887