The US Geological Survey (USGS) has updated its assessment of volcanic hazard threats in the United States. Most volcanoes occur along the Pacific coast of the U.S., within the Aleutian Islands of Alaska, and on certain other Pacific islands such as Hawaii. The USGS lists 161 volcanos as dangerous, of which, 18 are considered to have a “very high” threat for damage. 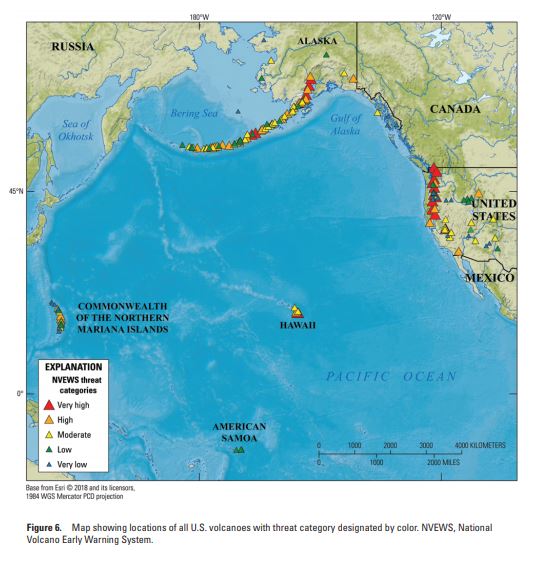 Kilauea volcano in Hawaii, which erupted last year, ranks number 1 as the most hazardous volcano. Mount St. Helens in Washington comes in at number 2. It last erupted in 1980.

Yellowstone caldera in Wyoming comes in at 21, a “high” threat. The San Francisco Volcanic Field near Flagstaff, AZ comes in at 80, a “moderate” threat.

According to the USGS:

The United States is one of Earth’s most volcanically active countries, having within its territory more than 10 percent of the known active and potentially active volcanoes. The geographic footprint of U.S. volcanoes is large, extending from arctic Alaska in the north to tropical American Samoa south of the Equator, and from Colorado in the east to the Commonwealth of the Northern Mariana Islands in the western Pacific. Since 1980, there have been 120 eruptions and 52 episodes of notable volcanic unrest (increased seismicity, observed ground deformation, and (or) gas emission) at 44 U.S. volcanoes.

Volcanoes produce many kinds of destructive phenomena. In the United States over the past 38 years, communities have been overrun by lava flows in Hawaii and in Washington State, a powerful explosion has devastated huge tracts of forest and killed people tens of miles from the volcanic source, and debris avalanches and mudflows have choked major river ways, destroyed bridges, and swept people to their deaths. In California, noxious gas emissions have resulted in fatalities, and in Hawaii, given rise to widespread respiratory ailments. Airborne ash clouds have caused hundreds of millions of dollars of damage to aircraft and nearly brought down passenger jets in flight in U.S. and international airspace, and ash falls have caused agricultural losses and disrupted the lives and businesses of hundreds of thousands of people in Washington State and Alaska. The growing risk of such severe threats to communities, property, and infrastructure downstream and downwind of volcanoes drives the need to decipher past eruptive behavior, monitor the current activity, and mitigate damaging effects of these forces of nature.

The full report may be downloaded here: https://pubs.er.usgs.gov/publication/sir20185140

(50 pages, 24Mb). It contains photographs of volcanic damage and many regional maps and descriptions of the local volcanoes.

Here is a list of the 18 most dangerous volcanoes according to the USGS (go to the full report to see the rest):