The Lyre snake is named for a V-shaped marking on the back of the head. This marking is often more prominent on females. Dark brown saddles occur on a light brown to light gray back. The underside is creamy-white or yellow with scattered brown spots. At first glance the Lyre snake may look like the common king snake. But, the Lyre snake’s neck is narrow, making the head appear more triangular, similar to other venomous snakes. Also, the eyes have pupils that are vertical slits rather than round as are on non-venomous snakes. Lyre snakes can get up to four feet long.

The Lyre snake (Trimorphodon lambda) is usually a nocturnal hunter, but can be found basking in the sun in the spring and fall. The main prey are lizards and mice, but the snake also goes after other prey including birds (It does climb trees). 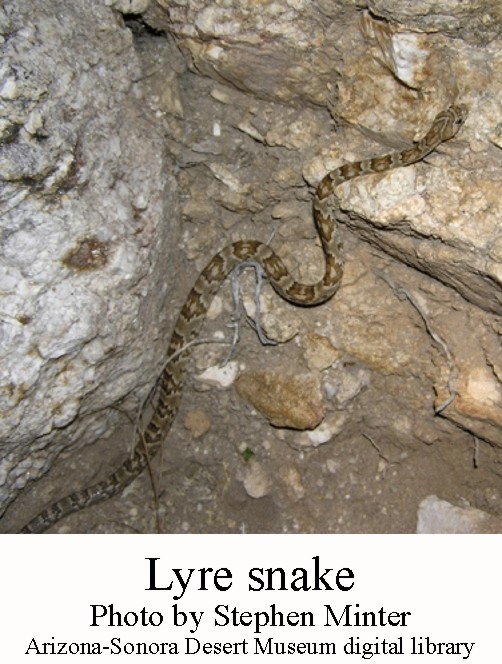 The range of this snake includes most of Southern Arizona, and extends to southern Nevada and Utah, as well as northern Mexico. It favors the lower rocky canyons and arroyos of hills and mountains from sea level to 7400 feet (2300 m). A rock dweller, it wedges itself in the many crevices and fissures that are abundant in rocky areas. This snake is an occasional resident of flat lands, according to the Arizona-Sonora Desert Museum.

According to the Tucson Herpetological Society:

Lyre snakes are not usually dangerous to humans. “When threatened, the Sonoran Lyresnake will often rattle its tail. It will sometimes raise the anterior portion of the body, and strike and bite if further provoked.” The Lyre snake does not have fangs. Rather, “Toxins produced in a Duvernoy’s gland are delivered to prey and attackers via elongated, grooved teeth in the rear of the upper jaw. A large individual is capable of delivering a venomous bite to a person. Symptoms range from none to local redness, itching, swelling, and numbness, particularly if the snake is allowed to chew.”

For more photos and a very detailed description, see an article from the Tucson Herpetological Society: https://tucsonherpsociety.org/amphibians-reptiles/snakes/sonoran-lyresnake/ .

The Coachwhip a colorful snake