The following is a condensed version of an article by Dr. Tim Ball which first appeared in Technocracy News. Read the full paper here.

The CO2 error is the root of the biggest scam in the history of the world, and has already bilked nations and citizens out of trillions of dollars, while greatly enriching the perpetrators. In the end, their goal is global Technocracy (aka Sustainable Development), which grabs and sequesters all the resources of the world into a collective trust to be managed by them. ⁃ TN Editor

The Intergovernmental Panel on Climate Change (IPCC) claim of human-caused global warming (AGW) is built on the assumption that an increase in atmospheric CO2 causes an increase in global temperature. The IPCC claim is what science calls a theory, a hypothesis, or in simple English, a speculation.  Every theory is based on a set of assumptions. The standard scientific method is to challenge the theory by trying to disprove it.

In other words, all scientists must be skeptics, which makes a mockery out of the charge that those who questioned AGW, were global warming skeptics.

The most important assumption behind the AGW theory (Human caused global warming) is that an increase in global atmospheric CO2 will cause an increase in the average annual global temperature. The problem is that in every record of temperature and CO2, the temperature changes first. Think about what I am saying. The basic assumption on which the entire theory that human activity is causing global warming or climate change is wrong. The questions are how did the false assumption develop and persist?

The answer is the IPCC needed the assumption as the basis for their claim that humans were causing catastrophic global warming for a political agenda. They did what all academics do and found a person who gave historical precedence to their theory. In this case, it was the work of Svante Arrhenius. The problem is he didn’t say what they claim.  Anthony Watts’ 2009 article identified many of the difficulties with relying on Arrhenius. The Friends of Science added confirmation when they translated a more obscure 1906 Arrhenius work. They wrote,

Much discussion took place over the following years between colleagues, with one of the main points being the similar effect of water vapour in the atmosphere which was part of the total figure. Some rejected any effect of CO2 at all. There was no effective way to determine this split precisely, but in 1906 Arrhenius amended his view of how increased carbon dioxide would affect climate.

The issue of Arrhenius mistaking a water vapor effect for a CO2 effect is not new. What is new is that the growing level of empirical evidence that the warming effect of CO2, known as climate sensitivity, is zero. This means Arrhenius colleagues who “rejected any effect of CO2 at all” are correct. In short, CO2 is not a greenhouse gas.

The IPCC through the definition of climate change given them by the United Nations Framework Convention on Climate Change (UNFCCC) were able to predetermine their results.

a change of climate which is attributed directly or indirectly to human activity that alters the composition of the global atmosphere and which is in addition to natural climate variability observed over considerable time periods.

This allowed them to only examine human-causes, thus eliminating almost all other variables of climate and climate change. You cannot identify the human portion if you don’t know or understand natural, that is without human, climate or climate change. IPCC acknowledged this in 2007 as people started to ask questions about the narrowness of their work. They offered the one that many people thought they were using and should have been using. Deceptively, it only appeared as a footnote in the 2007 Summary for Policymakers (SPM), so it was aimed at the politicians. It said,

“Climate change in IPCC usage refers to any change in climate over time, whether due to natural variability or as a result of human activity. This usage differs from that in the United Nations Framework Convention on Climate Change, where climate change refers to a change of climate that is attributed directly or indirectly to human activity that alters the composition of the global atmosphere and that is in addition to natural climate variability observed over comparable time periods.”

Few at the time challenged the IPCC assumption that an increase in CO2 caused an increase in global temperature. The IPCC claimed it was true because when they increased CO2 in their computer models, the result was a temperature increase. Of course, because the computer was programmed for that to happen. These computer models are the only place in the world where a CO2 increase precedes and causes a temperature change. This probably explains why their predictions are always wrong.

An example of how the definition allowed the IPCC to focus on CO2 is to consider the major greenhouse gases by name and percentage of the total. They are water vapour (H20) 95%, carbon dioxide (CO2) 4%, and methane (CH4) 0.036%. The IPCC was able to overlook water vapor (95%) by admitting humans produce some, but the amount is insignificant relative to the total atmospheric volume of water vapour. The human portion of the CO2 in the atmosphere is approximately 3.4% of the total CO2  To put that in perspective, approximately a 2% variation in water vapour completely overwhelms the human portion of CO2. This is entirely possible because water vapour is the most variable gas in the atmosphere, from region to region and over time. 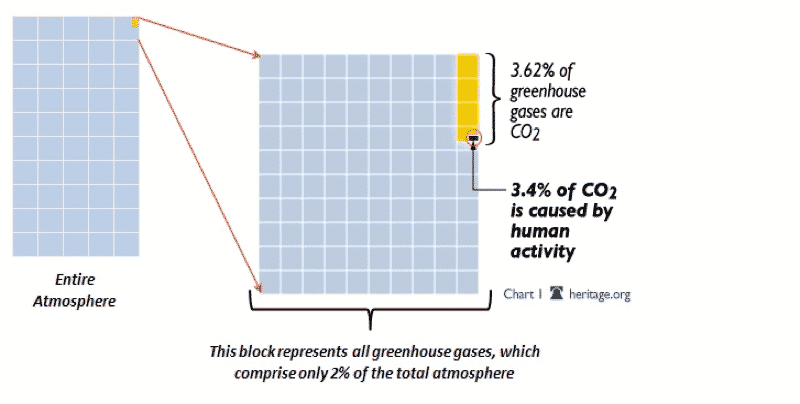 In 1999, after two IPCC Reports were produced in 1990 and 1995 assuming a CO2 increase caused a temperature increase, the first significant long term Antarctic ice core record appeared. Petit, Raynaud, and Lorius were presented as the best representation of levels of temperature, CO2, and deuterium over 420,000-years. It appeared the temperature and CO2 were rising and falling in concert, so the IPCC and others assumed this proved that CO2 was causing temperature variation. I recall Lorius warning against rushing to judgment and saying there was no indication of such a connection.

In their seminal paper on the Vostok Ice Core, Petit et al (1999) [1] note that CO2 lags temperature during the onset of glaciations by several thousand years but offer no explanation. They also observe that CH4 and CO2 are not perfectly aligned with each other but offer no explanation. The significance of these observations are therefore ignored. At the onset of glaciations temperature drops to glacial values before CO2 begins to fall suggesting that CO2 has little influence on temperature modulation at these times.

Lorius reconfirmed his position in a 2007 article.

“our [East Antarctica, Dome C] ice core shows no indication that greenhouse gases have played a key role in such a coupling [with radiative forcing]”

Despite this, those promoting the IPCC claims ignored the empirical evidence. They managed to ignore the facts and have done so to this day.

“The great tragedy of science – the slaying of a lovely hypothesis by an ugly fact.”

The most recent ugly fact was that after 1998 CO2 levels continued to increase but global temperatures stopped increasing. Other ugly facts included the return of cold, snowy winters creating a PR problem by 2004.

The people controlling the AGW deception were aware of what was happening. Emails from 2004 leaked from the University of East Anglia revealed the concern.

The assumption that an increase in CO2 causes an increase in temperature was incorrectly claimed in the original science by Arrhenius. He mistakenly attributed the warming caused by water vapour (H2O) to CO2. All the evidence since confirms the error. This means CO2 is not a greenhouse gas. There is a greenhouse effect, and it is due to the water vapour. The entire claim that CO2 and especially human CO2 is absolutely wrong, yet these so-called scientists convinced the world to waste trillions on reducing CO2.

Testing the hypothesis that variations in atmospheric water vapour are
the main cause of fluctuations in global temperature (link)
Because water has been considered as providing positive feedback to warming primarily from CO2 its possible forcing effect has been overlooked. But as shown here by several different means, the more potent effect of applying water previously in the ocean or deep in the ground to dry surfaces with air in strong water deficit can be sufficient to affect global temperature. Clearly, the water vapour content of the troposphere is the major cause of the natural greenhouse effect, contributing up to two-thirds of the 33°C warming. Spatial and temporal variations in soil moisture and relative humidity of the atmosphere are the main factors controlling the regional outgoing longwave radiation (OLR), in contrast to the more even effects from well-mixed greenhouse gases such as CO2. This is well illustrated in the 4-6 year El Nino cycles, resulting in a global mean temperature variation approaching 1 oC compared with La Nina years. Longer term, the proposed Milankovitch glaciations of paleoclimates result in declines of atmospheric temperature around 10°C, consistent with the major reduction in tropospheric water vapour approaching 50%. Weather conditions and climate as illustrated in the greenhouse effect are clearly demonstrated in the distribution of water, particularly on land. The apparently linear relationship between the water content of the atmosphere is direct verification of the greenhouse warming effect of this greenhouse gas. By contrast, other than by correlation, there is no such direct verification possible for the greenhouse effect of CO2.
Ivan R. Kennedyand Migdat Hodzic
Periodicals of Engineering and Natural Sciences ISSN 2303-4521
Vol. 7, No. 2, August 2019, pp.870-880