Many proponents of human induced global warming (the AGWs) take issue with some of my posts on climate and cite the website Skeptical Science as their authority. Rather than being skeptical, the site Skeptical Science has always defended the AGW orthodoxy against “heretical” skeptics and in doing so often mis-characterize evidence.

I, too, sometimes look at the site to see what they are ranting about. Their current rant is that PBS dared to interview climate skeptic Anthony Watts, proprietor of Watts Up With That calling his appearance a ‘false balance” as if “balance” actually mattered to them.

Within that rant at Skeptical Science is this statement: “…the amount of warming caused by human greenhouse gas (GHG) emissions is known to a high degree of certainty, and these same studies have all found that GHGs are responsible for over 100% of the observed warming over this timeframe (Figure 3).” Over 100%, wow. Here is their figure 3 which shows by color coding the various attributions of several allegedly peer-reviewed papers, all of which Skeptical Science claims show that human greenhouse gases have produced more than 100% of observed warming. 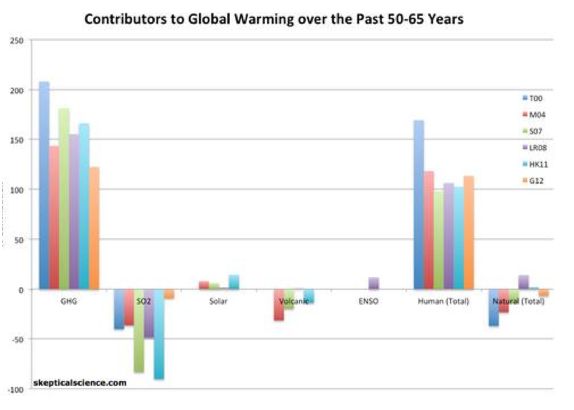 Anthony Watts comments on the article, “..when you see the sort of things the people at Skeptical Science write, you start to understand that this isn’t about science, but about pure unmitigated hate against people that have differing views about climate science.”

Let this serve as notice to AGW proponents who cite Skeptical Science as their authority. Your comments stand a good chance of being deleted if that is your only source, because much of the material on Skeptical Science is, in my opinion just so much drivel.

Concern over climate change is cooling with the public. What is an alarmist to do? Some researchers have a suggestion. A letter in the journal Climatic Change , titled “A public health frame arouses hopeful emotions about climate change,” suggests promoting global-warming related health scares to engage the public.

Communication researchers and practitioners have suggested that framing climate change in terms of public health and/or national security may make climate change more personally relevant and emotionally engaging to segments of the public who are currently disengaged or even dismissive of the issue. To evaluate these assumptions, using a nationally representative online survey of U.S. residents (N = 1,127) conducted in December, 2010, we randomly assigned six previously identified audience segments on climate change to one of three experimental conditions. Subjects were asked to read uniquely framed news articles about climate change emphasizing either the risks to the environment, public health, or national security and the benefits of mitigation and adaptation-related actions. Results show that across audience segments, the public health focus was the most likely to elicit emotional reactions consistent with support for climate change mitigation and adaptation. Findings also indicated that the national security frame may possibly boomerang among audience segments already doubtful or dismissive of the issue, eliciting unintended feelings of anger. (See full paper here and some commentary on it here.)

Notice the goal of the paper is to elicit emotions rather than rational thinking. The researchers studied the best way to shape global warming propaganda to produce alarmist concern, in other words, how to best manipulate your thinking.

If the propagandists take the advice of the study, we will see more global warming health scare stories in the future. It’s all about perception rather than science. And remember, there is much money, and many academic and bureaucratic careers resting on your emotional perception of the issue.

A Basic Error in Climate Models