After several quiet years, Arizona has had a very active wildfire season. Halfway through 2017, just over 352,000 acres have been burned in Arizona by wildfires of >100 acres in size (Inciweb for Arizona: https://inciweb.nwcg.gov/state/3/). This was the worst fire season since the record burns of 2011, and is almost 4 times as many acres burned than in 2013 (Table 1; Southwest Coordination Center: https://gacc.nifc.gov/swcc, accessed July 12, 2017). While the worst part of the fire season is likely behind us, based on recent years we can expect to see more wildfires in the fall. Most of the 2017 burned acreage has been on land managed by the U.S. Forest Service (USFS), followed by Arizona State lands (AZFD), Bureau of Indian Affairs (BIA), and Bureau of Land Management (BLM).

As the monsoon season ramps up, it is time to be cognizant of potential post-fire flooding and debris flows. Both floods and debris flows pose significant hazards to human health, property and infrastructure, and both carry a significant amount of sediment, woody material and rocks. Debris flows can be more dangerous, however, as they resemble slurries of dense, fast-moving concrete that carry more sediment and woody debris and larger caliber rocks (maybe up to basketball sized rocks in floods and car or truck sized boulders in debris flows).

Wildfires significantly impact watershed hydrology, causing much more runoff to occur and frequently triggering post-fire floods and debris flows. In the absence of wildfire, unburned vegetation intercepts raindrops, mitigating the impacts of high-velocity drops on soils. Depending on the burn severity of the wildfire, interception of rainfall by plants can be severely reduced or completely eliminated. At the same time, infiltration of water into the soil is impeded by the presence of ash and fire-related changes to soils (e.g. hyper-dry soils, hydrophobicity, and the destruction of organic matter). These changes result in increased runoff volumes and velocities such that smaller, short-lived monsoon storms can generate tremendous runoff, flooding, and debris flows, and do a huge amount of geomorphic work (i.e. erosion and transportation of sediment) in a very short period of time.

The Arizona Geological Survey (AZGS) is beginning a two-year project to inventory landslide sites throughout Arizona. They will inventory historic and prehistoric landslides, focusing initially on highly populated areas and transportation corridors where hazards and risks are greatest. Recall that the 2013 landslide that took out Highway 89 near Page, Arizona, was on a historic landslide site.

Landslide hazards are on the increase as development expands into mountainous terrain and as record wildfires and monsoon rains fuel dangerous, fast moving debris flows, a type of landslide activity.

AZGS has an existing, two-page, information sheet “Landslides in Arizona: Just the facts” which you can download now. That sheet shows several graphics including the types of landslides. 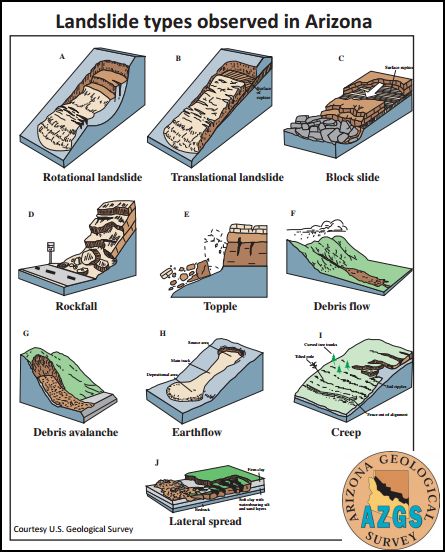 The proposed landslide database will allow local authorities to assess risk and take steps to minimize that risk.

According to AZGS, “This program will create an online interactive Arizona Statewide Landslide Inventory Database (AzSLID) of known and newly identified landslides; and an outreach and education program to inform local, tribal, county, state and federal stakeholders and the general public regarding the distribution, nature and scope of landslides and landslide hazards in Arizona.”

The program is funded by a grant of $150,656 from the Arizona Department of Emergency and Military Affairs (DEMA) obtained from the federal Pre-Disaster Mitigation program and by $50,219 from AZGS.

The Arizona Department of Emergency and Military Affairs (DEMA) has a hazard mitigation program, part of which deals with landslides (see here). In that report they show a map of landslide incidence and susceptibility. I notice that the map does not show the debris flows in the Santa Catalina Mountains which swept through Sabino Canyon in recent years. That alone shows the need for a better inventory program. 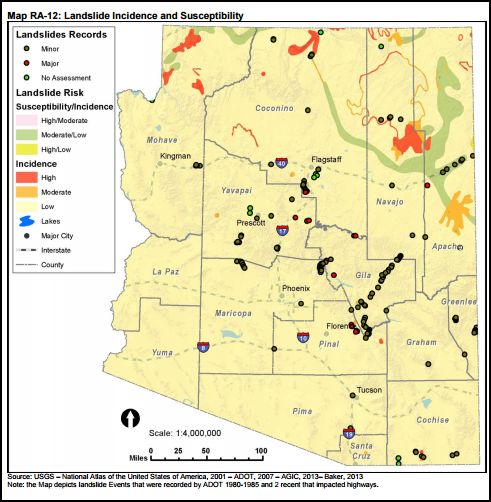 Inventorying landslides and developing hazard and risk map assessments now will make Arizonans, their property and infrastructure safer in the years ahead.

The Arizona Geological Survey has teamed up with Arizona Public Media to produce a short story and seven-minute video about debris flows in the Santa Catalina Mountains.

Debris flows are landslides composed of water, rock, soil, vegetation, and anything else that becomes entrained in the slide.  The southern face of the Santa Catalina Mountains contain evidence of debris flow as old as 15,000 years, and as recent as the 2006 debris flow in Sabino Canyon.

Debris flow are precipitated by heavy monsoon rains and the mountain slopes are made more susceptible to such flows by being denuded by forest fires.  Geologists claim they can predict where debris flow may happen, but not when.

See the story  and video here:

Steep slopes denuded by forest fires are prime candidates for debris flows during our summer monsoon. A debris flow is a mixture of soil, cobbles, boulders, and water, with the consistency of concrete moving down a steep slope at 20 miles per hour or more. Typically debris flows are more destructive than floods.

The Horshoe 2 fire in the Chiricahua Mountains has destroyed most of the vegetation in that range. We may have destructive debris flows this summer in the burned areas.

The Arizona Geological Survey has just released its winter edition of Arizona Geology magazine which is available for free download here. Each story is well-documented with photos and videos.

The lead story is a case study of the June, 2010, Shultz wildfire near Flagstaff which denuded the forest and with heavy rains, lead to flooding. “In June 2010, the Schultz Wildfire burned 15,000 acres of woodland on the east slope of the San Francisco Peaks in the Coconino National Forest. Near record monsoon rains in July and August produced debris flows and floods, the latter of which damaged dozens of homes, caused the temporary evacuation of over 1000 people, and led to one drowning death.”

The story on Arizona earthquakes shows maps of locations and magnitudes of 50 earthquakes recorded in Arizona during 2010. These observations are made possible by the new Arizona Integrated Seismic Network (AISN) which is in its third year in operation. The story tells us why Arizona earthquakes occur where they do. The article also provides a link to discussion and photos of the strong April 4, 2010, earthquake in northern Baja California, just southwest of Yuma.

Until recently, topics concerning geology were mostly absent in the displays and interpretive signs found within Grand Canyon National Park. That omission has now been remedied.

Billed by its creators as “the world’s largest geoscience exhibition at one of earth’s grandest geologic landscapes,” the Trail of Time interprets the geology of Grand Canyon’s spectacular views and its largely inaccessible rocks. The trail leads visitors towards key geologic concepts that can be read in the rocks of the canyon and serves to help people contemplate and more fully appreciate the enormity of geology and the larger meaning of geologic thought. One of the recurrent themes presented on the trail is that of “deep time…”

In the article titled “Summary of Oil and Gas Activity” we learn that oil & gas exploration and production, although small, does occur in Arizona. Additional wells were drilled for geothermal energy exploration and to test for carbon dioxide sequestration.

The Winter edition of Arizona Geology contains very interesting articles. Give it a look at: