It seems that all Democrat candidates for president want to get rid of fossil-fuel-powered automobiles and have us all drive electric vehicles. But guess where the electricity to charge those vehicles comes from – mostly from burning natural gas or coal.

The other main problem with pure electric vehicles is their limited range. That problem has been solved, sort of.

In Australia and New Zealand, they are deploying small, diesel-powered generators. See photo below.

Another solution is to tow a generator behind your EV. Unknown to me, this option has been available for some time and for several car models. See Cars with Cords for photos of several models. Of course, this option turns your pure EV into a hybrid. 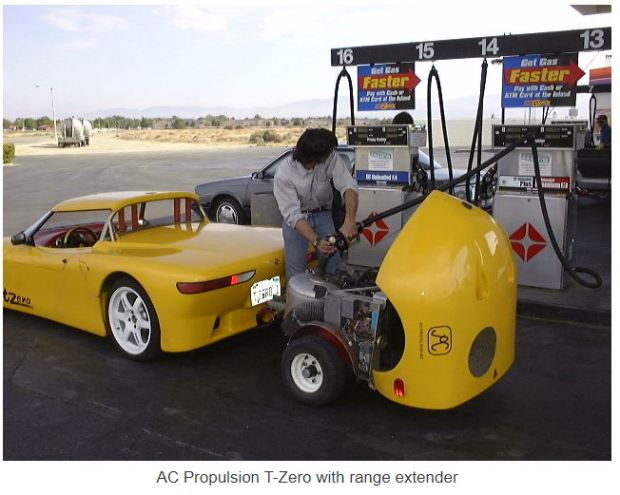 See also: Low-Emission Range Extender for Electric Vehicles, a 10-page analysis of the pros and cons of towing a generator. The article begins:

“Typical auto trips are within the driving range of efficient electric vehicles (EVs), but typical vehicle use also includes occasional trips that exceed EV range. EV users may face the necessity of maintaining a second car, or renting a car, for such trips. An alternative is the use of a range extending trailer (RXT), a trailer-mounted generator that, when towed behind an EV, effectively converts the EV to series-hybrid mode for long trips.”

Back in 1896, Thomas Edison told Henry Ford to forget about electric vehicles and stick to his gasoline engines. (source) Is this advice still relevant?

My article from 2010 gives a history of electric vehicles:

Perhaps these underwhelming results show that Irish consumers are smarter than the government.

And that’s the luck of the Irish.

The global warming potential in the “production phase” of electric vehicles is double that of internal combustion engine vehicles (ICEVs). “In contrast with ICEVs, almost half of an EV’s life cycle GWP is associated with its production. We estimate the GWP from EV production to be 87 to 95 grams carbon dioxide equivalent per kilometer (g CO2-eq/km), which is roughly twice the 43 g CO2-eq/km associated with ICEV production. Battery production contributes 35% to 41% of the EV production phase GWP, whereas the electric engine contributes 7% to 8%. Other power train components, notably inverters and the passive battery cooling system with their high aluminum content, contribute 16% to 18% of the embodied GWP of EVs.”

The authors of this paper have tried to base their estimates on a typical use scenario, but they realize that conditions vary. They discuss many caveats in their estimate in an effort to be transparent. Read the full paper for details.

Which Vehicles Are Most Energy Efficient?

Tucson is the guinea pig for a project run by ECOtality of North America to install chargers for electric vehicles in 16 cities throughout the country. Tucson will get 240 chargers. The company hopes, during the next few years, to install 14,650 level 2 (220V) chargers and 310 DC fast chargers. The level 2 chargers can replenish batteries in 4- to 6 hours, while the DC fast chargers can give at least half a charge in 30 minutes. The bulk of the money, some $114.8 million, comes from government grants, your tax dollars. Other funding comes from “partners” such as Tucson Electric Power, Arizona Public Service, the Pima Association of Governments (using tax dollars), General Motors, and Nissan.

ECOtality will use information gathered from Tucson to help plan arrays of chargers in other cities. Phoenix will also get an array of chargers and there will be charging stations along I-10 at Picacho Peak and Casa Grande so that electric vehicles can actually travel between Tucson and Phoenix.

The partnership with Nissan and GM will allow ECOtality to provide home chargers and installation free of cost to purchasers of the Nissan Leaf and Chevy Volt, if the owners sign up with the program.

The Tucson array of chargers will be placed at businesses and other venues. ECOtality president, Don Karner, was somewhat evasive when I asked him at a press conference Friday about the charging cost to vehicle owners. From my understanding of what he said, the businesses will provide the electricity to customers free of charge under the theory that the businesses will get more customers by providing the service. There will be a fee for charging vehicles along I-10, but ECOtality has not yet worked out what that will be.

Electric vehicles were popular in the U.S. about 100 years ago as toys for the wealthy. But they were soon displaced by the much more versatile gasoline-powered vehicles. It remains to be seen whether or not arrays of charging stations will attract customers. It’s like the “Field of Dreams.” If they built it, will customers come?