The great circle airline route from Los Angeles to London passes over Hudson Bay (very icy on June 10, 2012), and southern Greenland. The photos below, taken from our flight to London at an altitude of 39,000 feet show the terrain near the southern coast of Greenland. The coastal area is not covered by the continental glacier of central Greenland. The sea, within a few miles of the coast contained hundreds of icebergs.

The first photo shows the general terrain of coastal Greenland. From 39,000 feet you can see the curvature of the earth, look at the horizon. 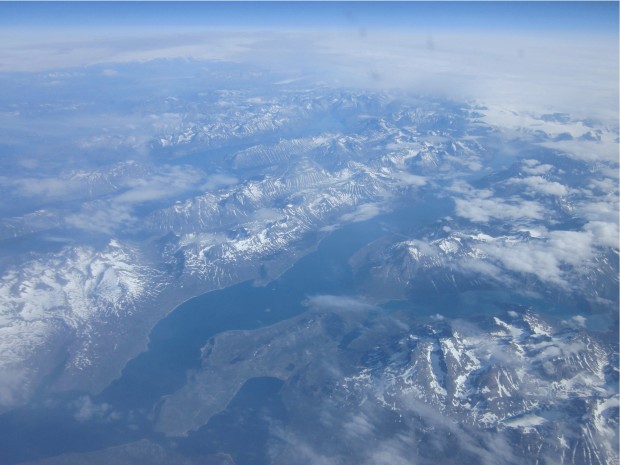 The next photo shows a small, snow-covered glacier near the center of the picture, along with a terminal moraine (pile of rocks) spilling into an estuary. 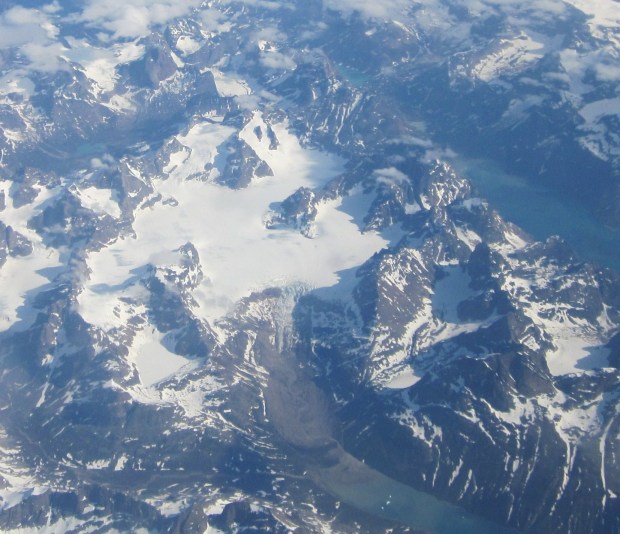 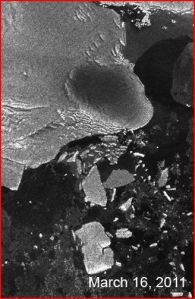 Several icebergs the size of Manhattan broke off the Sulzberger Ice Shelf in West Antarctica last March as a result of the March 11, 2011 Japanese earthquake and tsunami.  It had long been theorized that tsunamis could cause glacial calving.  Now NASA has proof that the Japanese tsunami caused formation of icebergs. See NASA photos and video here.

The Sulzberger Ice Shelf was especially susceptible to waves because there was no nearby sea ice, landfast ice or pack ice in the area.

NASA expects another large chunk, 340 square miles, to break off the Pine Island Glacier later this year or in early 2012.  Already there is a split 200 ft deep, 800 feet wide, running 20 miles so far along the glacier.  Pine Island Glacier last calved a significant iceberg in 2001, and some scientists have speculated recently that it was primed to calve again.  See NASA slide show and video here.

“While Pine Island has scientists’ attention because it is both big and unstable – scientists call it the largest source of uncertainty in global sea level rise projections – the calving underway now is part of a natural process for a glacier that terminates in open water. Gravity pulls the ice in the glacier westward along Antarctica’s Hudson Mountains toward the Amundsen Sea. A floating tongue of ice reaches out 30 miles into the Amundsen sea beyond the grounding line, the below-sea-level point where the ice shelf locks onto the continental bedrock. As ice pushes toward the sea from the interior, inevitably the ice shelf will crack and send a large iceberg free.” – NASA

NASA is keeping close watch. This may be the first time such a large calving is seen as it  happens.

Where the Next Big American Earthquake and Tsunami Might Occur

Earth’s Magnetic Poles, Reversing or Not