The U.S. Geological Survey has just released their annual summary of non-fuel mineral production in the U.S. for 2016. They estimate that the value of all non-fuel minerals produced from U.S. mines was $74.6 billion, a slight increase over production in 2015. “ Domestic raw materials and domestically recycled materials were used to process mineral materials worth $675 billion. These mineral materials were, in turn, consumed by downstream industries with an estimated value of $2.78 trillion in 2016.”

Nevada was ranked first with a total mineral production value of $7.65 billion, mainly from gold. Arizona came in second in total production with a value of $5.56 billion and first in U.S. copper production. Texas, California, Minnesota, Florida, Alaska, Michigan, Wyoming, Missouri, and Utah, in that order, were next in value of production.

“In 2016, U.S. production of 13 mineral commodities was valued at more than $1 billion each. These were, in decreasing order of value, crushed stone, cement, construction sand and gravel, gold, copper, industrial sand and gravel, iron ore (shipped), lime, phosphate rock, salt, soda ash, zinc, and clays (all types).” Does that order surprise you?

Most of the material mined (stone, sand, lime, clay) is used in construction of our infrastructure.

Gold is used as coinage and to manufacture jewelry. Because gold does not corrode, it is used in solid state electronic devices that use very low voltages and currents which are easily interrupted by corrosion or tarnish at the contact points.

Copper is used mainly to generate and transmit electricity and it occurs in all our electronic devices.

Zinc is used for galvanizing to prevent corrosion and, combined with copper to make brass. Zinc is also combined with other metals to form materials that are used in automobiles, electrical components, and household fixtures. Zinc oxide is used in the manufacture of rubber and as a skin ointment.

Phosphate rock is used mainly as a fertilizer and also as a nutritional supplement for animals and humans.

A note on reserves and resources:

Reserves data are dynamic. They may be reduced as ore is mined and (or) the feasibility of extraction diminishes, or more commonly, they may continue to increase as additional deposits (known or recently discovered) are developed, or currently exploited deposits are more thoroughly explored and (or) new technology or economic variables improve their economic feasibility. Reserves may be considered a working inventory of mining companies’ supplies of an economically extractable mineral commodity. As such, the magnitude of that inventory is necessarily limited by many considerations, including cost of drilling, taxes, price of the mineral commodity being mined, and the demand for it. Reserves will be developed to the point of business needs and geologic limitations of economic ore grade and tonnage. For example, in 1970, identified and undiscovered world copper resources were estimated to contain 1.6 billion metric tons of copper, with reserves of about 280 million tons of copper. Since then, more than 500 million tons of copper have been produced worldwide, but world copper reserves in 2016 were estimated to be 720 million tons of copper, more than double those of 1970, despite the depletion by mining of almost double the original estimated reserves. 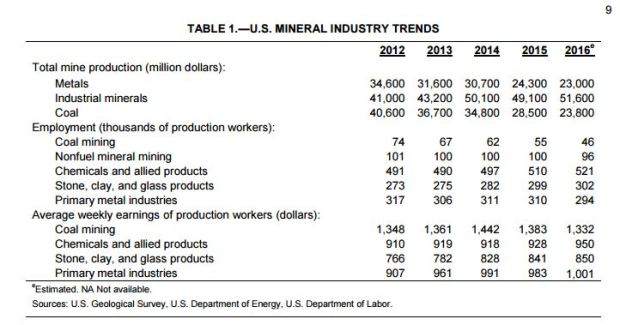 As can be seen in the table above, there was a decline in the production of coal, probably due to the rise in natural gas production. Metal production also decreased. According to the USGS, “Several U.S. metal mines and processing facilities were idled or closed permanently in 2016, including iron ore mines in Michigan and Minnesota; three primary aluminum smelters in Indiana, Missouri, and Washington; one secondary zinc smelter in North Carolina; a titanium sponge facility in Utah, the only such facility in the United States; and titanium mineral operations in Virginia.” In 2016, imports made up more than one-half of the U.S. apparent consumption of 50 non-fuel mineral commodities, and the United States was 100% import reliant for 20 of those.

The 200-page report gives detailed information for each commodity.

This is a follow-up to Permitting, Economic Value, and Mining in the United States.

In that post I reported that a new report commissioned by the National Mining Association finds that our current convoluted mine permitting process can cause a mine to lose a third of its value as it waits for the numerous permits needed to begin production. These delays, combined with other risks and costs, cut the expected value of a mine in half. This often makes minerals projects economically unviable and jeopardizes an important feedstock of the manufacturing industry while discouraging investment in the U.S.

The report, produced by SNL Metals & Mining of London, can be downloaded here.

Here I present a 3-minute video featuring Mark Fellows, director of consulting at SNL Metals & Mining. He explains that of all the developed nations, the U.S. is afflicted most severely by protracted delays in obtaining mining permits, impairing and discouraging investments in mineral development projects. Companies need certainty when considering an investment. Currently the permitting process contains many uncertainties and opportunity for delay.

These delays cause manufacturers to become overly reliant on minerals imports, despite a wealth of resources in the U.S. Lawmakers must implement policies that guarantee manufacturers access to the raw materials needed to succeed. Watch to learn more. The video is followed by a new Infographic illustrating the problem.

The National Mining Association has just released a new survey of more than 400 senior level executives in the manufacturing industry. The survey revealed significant concern among business leaders that current mining policy presents a challenge to their supply chain and that reform is necessary.

Results of the survey are shown on the info-graphic below:

Copper is vital to our civilization. It is used in many things we may take for granted. Below is an infographic from the National Mining Association showing how copper is used and where it is mined in the United States (you can get the graphic here).

You can also get a new report “U.S. Mines to Market” which shows the importance of mining to the manufacturing segment of our economy.

Among other things, the report discusses:

As the U.S. manufacturing sector continues to grow, the importance of a secure, stable, reliable and sustainable raw material supply is increasing.

The U.S. permitting process for new mineral and metal mines makes it difficult for our nation to reduce dependence on foreign-sourced raw materials. As it stands, the average waiting period for U.S. mine permitting is seven to ten years. Just to put that into perspective, in Canada and Australia—countries with similarly stringent environmental regulations—the waiting period is two years.

In regard the that last point, see my posts:

If it can’t be grown, it has to be mined

Mining and the bureaucracy

Think about where we get all the stuff we use. It all comes from the earth: food and fiber is grown; metals, fuels, and chemicals come from mining.

Both farming and mining provide the raw materials we need, but too often now, the manufacturing end of the process was going overseas, perhaps because of less expensive labor, but increasingly because federal regulations make starting a new mine very expensive and time consuming.

The National Mining Association opines: “Although the U.S. remains one of the largest consumers of minerals, our outdated, duplicative mining permitting process can delay projects up 10 years! By streamlining the federal permitting process, new mining projects would be able to more efficiently come online, contribute to a domestic manufacturing resurgence and create desperately needed jobs in both industries – mining and manufacturing.”

An short NMA video (just over one minute) “depicts the widespread re-shoring of manufacturing operations that are expected to create between 2.5 to 5 million American jobs by 2020. As you know, America’s manufacturing comeback is only possible with stable access to key mineral resources, and we have more than $6.2 trillion worth of these resources waiting to be developed right here in the United States.

“Gold is one of the world’s most sought-after minerals, prized for its value and unique qualities. Most frequently associated with jewelry, many people are not aware of its versatility and contributions to daily life. From the fastest technology to the most sophisticated medical equipment, gold is a vital resource. Without gold, our GPS and satellite technology could not navigate as quickly, our astronauts would not have adequate protection from harmful radiation and our doctors would not have the technology behind life-supporting medical equipment.”

The National Mining Association has produced an info-graphic (see below) on the current uses of gold in modern life (link). They also have a “tool kit” which shows how we all depend on minerals in our daily lives. Give it a look.