Last week the alarmist press was trumpeting the appearance of a crater in the tundra of northern Siberia on the Yamal Peninsula. Typical was this from the British paper Mail Online: “Methane explosion? Meteorite crater? Scientists baffled by gigantic 262ft hole that has appeared at Siberia’s ‘End of The World’” The name Yamal means, in the language of native people there, “end of land.” That became “end of the world” in press reports.

And, of course, the incident was related to global warming: “Anna Kurchatova from the Sub-Arctic Scientific Research Centre, thinks the crater was formed by a mixture of water, salt and gas igniting an underground explosion, a result of global warming.”

You can read a more rational story and see many photos in the Siberian Times and in two posts by Anthony Watts of the Watts Up With That blog here and here.

The name Yamal may be familiar to you because that is the site of the infamous false tree ring data that played prominently in the “hockey stick” graph and helped precipitate “climategate.”
(See: Climategate and Climategate, the plot thickens)

The crater was not formed by gas explosions, meteorite impacts, or UFOs. It is a common geologic phenomenon called a “Pingo.” Pingos form when the hydrostatic pressure of freezing groundwater raises a layer of frozen ground. Apparently those “baffled scientists” never took a geology course. 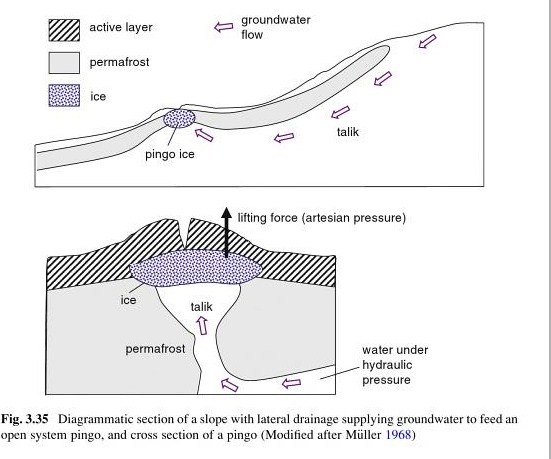 The formation of a Pingo is explained by Parks Canada:

When a pingo is growing, the ground stretches to accommodate its increasing surface area. The tundra splits apart in places, forming cracks – usually along the length of the pingo, especially near its summit – that may reach down as far as the ice core. If these cracks are large enough, the top of a pingo will resemble a crater. Sometimes water ponds in the crater, and this may begin to melt the ice core. More commonly, uplift of the sides of the pingo creates steep slopes that may become unstable and begin to erode. If the ice is exposed to the sun, the core will begin to melt. As its main support melts away, the pingo collapses. When the ice core has completely melted, all that remains is a doughnut-shaped ring of raised tundra enclosing a small round lake. In warmer regions, such as Ireland and the Netherlands, remnants of collapsed pingos have helped scientists determine that the climate was once cold enough in these areas to support a permafrost environment.

The University of Arizona thinks that its HiRISE imaging satellites may have found pingos on Mars (link, then scroll down to second photo). No global warming there.

About 3.6 million years ago a large meteor crashed into Siberia about 100 miles north of the Arctic Circle.  The impact created an eleven-mile wide crater that became a lake.  Lake El’gygytgyn collected sediments which record the climate and environmental conditions.  Since this area was not eroded by continental glaciers, researchers were able to collect sediment cores that provide “a continuous high-resolution record from the Arctic spanning the past 2.8 million years.”

This research provides more physical evidence that extreme warming and climate fluctuations occur as part of natural variation.  This research implies: 1) The globe has been much warmer without human influence during multiple periods over the past 2.8 million years, 2) IPCC climate models are incapable of reproducing past temps and therefore unable to project future temps, and 3) global warming far exceeding alarmist IPCC projections has occurred several times in the past without triggering any “tipping points.”

More details and a video are available from Phys.org here.  Additional comments are posted here,  here (graphs), and here.

When Antarctica Freezes Over

A 2485-year record shows current warming is a natural cycle

Norwegian research shows that current warming is not unusual

More evidence that current warming is not unusual

Ice Follies and Hiding the Decline