A press release from NASA titled “Satellites See Unprecedented Greenland Ice Sheet Surface Melt” set off a media frenzy and many blog articles reporting a great melting of 97% of the Greenland glacier surface. This announcement was based on a change in albedo, detected by satellites, which was interpreted as surficial melting. It is true that for a few hours between July 9 and 12, the surface temperatures crept barely above freezing. But, according to the Byrd Polar Research Center, changes in albedo can also be caused by temperature-driven snow metamorphism that reduces reflectivity by rounding the sharp ice crystal edges that scatter visible light and by increased snow impurities like carbonaceous soot from wildfires or diesel exhaust. We note that there have been many large, soot-creating wildfires lately.

Whatever the cause of the recent, sort-lived change in albedo, of greater concern is the news release itself with its hyped title and contradictory content. The ‘melting’ event was not “unprecedented.” Within the press release is this: “’Ice cores from Summit show that melting events of this type occur about once every 150 years on average. With the last one happening in 1889, this event is right on time,’” says Lora Koenig, a Goddard glaciologist and a member of the research team analyzing the satellite data.” Ice cores from another station (NEEM) showed similar melting in 1879 and 1935. It seems that the news release headline was purposely hyped to grab headlines, and so it did. This event does not bode well for NASA’s scientific reputation and shows that NASA is becoming much more political than scientific.

I’ve noticed that the term “unprecedented” is a favorite with global warming alarmists. It says much about NASA that they would write a self-contradictory press release, accompanied by a very misleading graphic, and also much about the credulous media (such as the Arizona Daily Star) which used the word “unprecedented” even though their own stories clearly showed it was not.

Below is a satellite image of Greenland from July 12, 2012. It does not appear to be melting. Also below is the temperature record for July from Summit Camp which sits atop the continental glacier at an elevation of 10,551 feet and a view from the live webcam at Summit Camp. 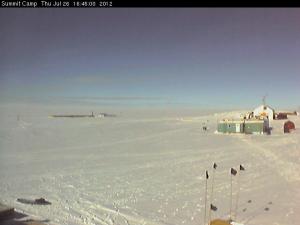 Greenland from 39000 feet  some photos I took of Greenland in June.