We begin with a very simplified review of what the greenhouse effect is. Solar radiation, mostly short-wave radiation, passes through the atmosphere and warms the surface. In turn, the heated surface re-radiates energy as long-wave infrared radiation back to the atmosphere and eventually, back to space.

The carbon dioxide concentration in the atmosphere has been increasing due in part to emissions from burning fossil fuels. This increased amount of CO2 should “intensify” the greenhouse effect and cause global warming according to the National Climate Assessment and the IPCC. So, what phenomena should we observe from an “intensified” greenhouse effect?

With an “intensified” greenhouse effect, we should see a decrease in out-going long-wave infrared radiation into space. We should see warming of the atmosphere (the troposphere), a “hot spot” especially over the tropics. We should see more down-welling infrared radiation that further warms the surface. That’s the essence of the anthropogenic global warming (AGW) hypothesis. But, real-world measurements show we are seeing none of those effects.

According to satellite data compiled by NOAA, out-going long-wave radiation into space has not been decreasing but, in fact, slightly increasing (source). 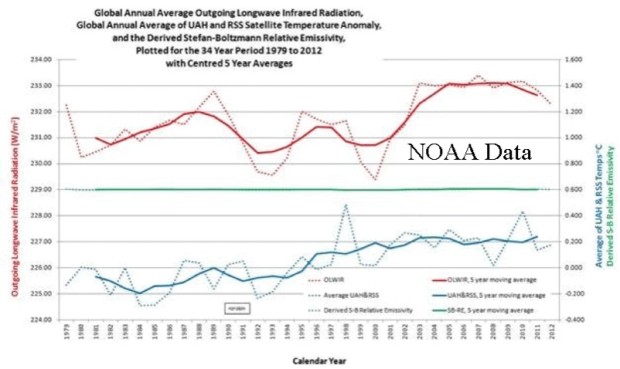 Balloon-borne radiosondes and two separate satellite systems measure the temperature of the troposphere. None of these systems detect the model-predicted warming spot in the troposphere. [Source: Douglass, D.H. et al. 2007, A comparison of tropical temperature trends with model predictions, International Journal of Climatology DOI:10.1002/joc.1651].

Finally, an independent study, published in the Journal of Climate, based on 800,000 observations, find there has been a significant decrease in down-welling, long-wave infrared radiation from increasing greenhouse gases over the 14 year period 1996-2010 in the US Great Plains. CO2 levels increased about 7% over this period and according to AGW theory, down-welling long-wave infra-red radiation should have increased over this period with buildup of carbon dioxide.

There is one more failed AGW prediction: CO2 is supposed to start warming which evaporates water, a stronger greenhouse gas that will enhance warming.  That should increase global humidity, but measurements show that global humidity is not increasing.

Empirical data show that the AGW hypothesis fails on four major predictions. This indicates that our carbon dioxide emissions have little to no effect on global temperature nor the intensity of the “greenhouse effect” possibly because the AGW hypothesis ignores convective heat transfer (weather) and other natural cycles that control the complex climate system.

Feynmann’s admonition is demonstrated by comparing global atmospheric temperatures predicted by models (based on their false assumptions) with real world observations. 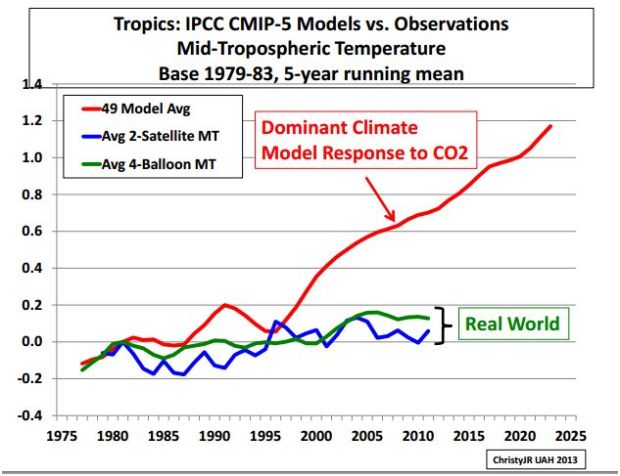 UPDATE: A 2017 report that examined the EPA endangerment finding concludes that temperatures in 14 data sets can be explained by natural variations and that CO2 plays no significant part. Read the 73-page report here. Here is the abstract:

The objective of this research was to determine whether or not a straightforward application of the “proper mathematical methods” would support EPA’s basic claim that CO2 is a pollutant. These analysis results would appear to leave very, very little doubt but that EPA’s claim of a Tropical Hot Spot (THS), caused by rising atmospheric CO2 levels, simply does not exist in the real world. Also critically important, this analysis failed to find that the steadily rising Atmospheric CO2 Concentrations have had a statistically significant impact on any of the 14 temperature data sets that were analyzed. The temperature data measurements that were analyzed were taken by many different entities using balloons, satellites, buoys and various land based techniques. Needless to say, if regardless of data source, the structural analysis results are the same, the analysis findings should be considered highly credible.

Thus, the analysis results invalidate each of the Three Lines of Evidence in its CO2 Endangerment Finding. Once EPA’s THS assumption is invalidated, it is obvious why the climate models EPA claims can be relied upon for policy analysis purposes, are also invalid. And, these results clearly demonstrate—14 separate and distinct times in fact–that once just the Natural Factor impacts on temperature data are accounted for, there is no “record setting” warming to be concerned about. In fact, there is no Natural Factor Adjusted Warming at all. Moreover, over the time period analyzed, these natural factors have involved historically quite normal solar, volcanic and ENSO activity. At this point, there is no statistically valid proof that past increases in atmospheric CO2 concentrations have caused the officially reported rising, even claimed record setting temperatures.

UPDATE 2: see The Broken Greenhouse – Why CO2 is a minor player in global climate

In a step-by-step dissection of the anthropogenic global warming (AGW) hypothesis, or “greenhouse hypothesis of global warming”, two prominent Greek atmospheric physicists – Dr. Carlos Varotsos and Dr. Maria Efstathiou – expose the withering contradictions between (a) what is hypothesized to occur atmospherically according to AGW models and (b) what was actually observed from satellite measurements during 1978 to 2018.

According to AGW models, there was supposed to be “a consistent warming with gradual increase from low to high latitudes in both hemispheres” in response to the dramatic increase in greenhouse gases over the last 40 years.

According to temperature change observations in the satellite era (December, 1978, to present), this pattern did not occur.

Satellite observations do not indicate that such a stratospheric-tropospheric relationship existed during this period.

The fundamental discrepancies between AGW models and real-world observations led these climate scientists to conclude that (a) “climate models are not able to simulate real climate”, and (b) the view that increases in greenhouse gases from human activities are what caused the global warming over the last 40 years cannot be reliably supported by observed evidence.