Although the Earth’s climate has been changing for more than 4 billion years all by itself, we are now told that we can stop climate change simply by reducing carbon dioxide emissions from burning fossil fuels.

Ignorance-based plans such as the Green New Deal propose that we terminate electricity generation by fossil fuels and replace all of it with renewables such as wind and solar. Proponents of such plans have not considered the environmental nor economic implications.

“Nothing in all the world is more dangerous than sincere ignorance and conscientious stupidity.” – Martin Luther King Jr.

1)The Enormous Land Requirements of Wind and Solar Electricity Generation

The enormous land requirements for enough wind and/or solar to replace fossil fuel generation will wreak havoc with agriculture, and will destroy wildlife and their habitats. 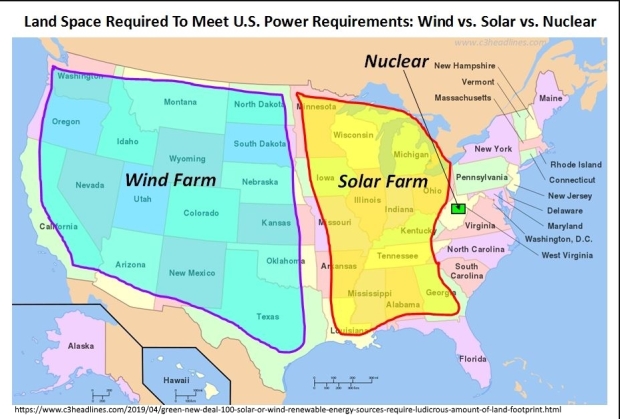 According to the Nuclear Energy Institute, for the contiguous U.S.:

If all electricity was supplied by nuclear generation, it would require 3,553 nuclear stations with a total footprint of 4,619 square miles.

If all electricity were to be supplied by solar generation it would require 11,674 solar farms with a total footprint of 525,312 square miles.

If all electricity were to be supplied by wind generation, it would require 6,954 wind farms with a total footprint of 1,808,166 square miles. (Source)

A minor problem: Because wind and solar generation are unreliable and intermittant, these methods would still require backup generation with is usually natural gas or coal generation. Because those backup units would have to be cycled up and down depending on wind and sunlight conditions, one ironic effect would be greenhouse gas emissions from natural gas–fired backup generation  are 22 percent higher than normal operation according to a study by the American Enterprise Institute.

Carbon dioxide (which makes up just 0.04% of the atmosphere) is continually being emitted into the atmosphere and absorbed by the oceans, plants, formation of limestone, etc. According to the U.S. Department of Energy annual emission reports, humans are responsible for about 3% of total CO2 emissions; the rest is from natural sources. Carbon dioxide constitutes about 3% to 4% of total greenhouse gases by volume (water vapor is the main greenhouse gas); therefore anthropogenic CO2 represents just over one-tenth of one percent (0.12%) of total greenhouse gases emitted into the atmosphere each year. The U.S. is responsible for about 18% of global emissions, so elimination of U.S. emissions will make a difference of about 0.02% of total emissions. Is stopping U.S. emissions worth spending trillions of dollars and disrupting our economy? Will that save the planet?

2) The deadly toll on wildlife from all these additional wind or solar installations:

“The U.S. Fish and Wildlife Service (FWS) and American Bird Conservancy say wind turbines kill 440,000 bald and golden eagles, hawks, falcons, owls, cranes, egrets, geese and other birds every year in the United States, along with countless insect-eating bats. Newer studies reveal that these appalling estimates are frightfully low and based on misleading or even fraudulent data. The horrific reality is that in the United States alone, “eco-friendly” wind turbines kill an estimated 13 million to 39 million birds and bats every year. See also: Avian mortality from solar farms

A new study from the American Enterprise Institute questions whether the Green New Deal would have any real impact on climate change at all — leaving it little more than an effort to dismantle industry.

The AEI report breaks down the GND into bite-sized policy proposals, assessing not simply the cost, but the proposed effectiveness of each legislative item to address the core goal of the GND: reducing American carbon emissions to a “net zero” by 2050.

The researchers’ ultimate conclusion? “It is not to be taken seriously.”

The “net zero” emissions proposal is particularly nonsensical, AEI warns, given that such an effort would require an estimated $490 billion per year investment in “green energy” ( $3,845 per year per household) and a sharp decrease in land available for agriculture. It also fails to address a very specific problem when it comes to U.S.-specific plans for climate change abatement: it fails to consider that the U.S. is only one of several heavy carbon-emitting nations, and that the vast majority of industrial pollution comes from the developing world and from countries like China and India.

In total, completely enacted, funded, and efficiently meeting goals, things AEI does not anticipate the GND would ever do — the full plan would cut the global increase in temperature by 0.083 to 0.173 degrees Celsius, by 2100, a number, the report says, is “barely distinguishable from zero.” (Source) ☼

4) Another part of the Green New Deal is retrofitting all buildings to be more energy efficient.

5) For most of geologic history, there is no correlation between global temperature and atmospheric CO2 content. Water vapor is the major greenhouse gas, about 25 times more abundant than carbon dioxide. 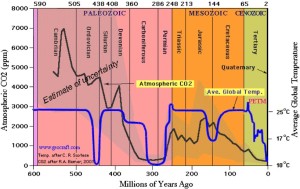 A major ice age occurred during the Ordovician Period 450 million years ago even thought atmospheric CO2 was 4,000ppm, 10 times higher than it is now. Carbon dioxide dropped during the Carboniferous Period because many of the Earth’s coal deposits formed then. By coincidence, a major ice age occurred at the end of the Carboniferous related to the 145 million year cycle of ice ages. Temperatures rose prior to rise of atmospheric CO2 at the end of the ice age. During the Jurassic and Cretaceous Periods,150 million years ago, CO2 began a long slide from about 2,500ppm to about 350ppm. However, global temperatures remained steamy for 50 million years during the Cretaceous Period at about 13°C warmer than now. The Cretaceous was another period of coal formation. 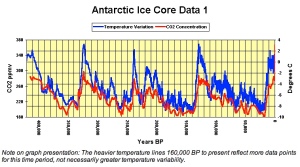 There is an apparent correlation during the glacial-interglacial cycles of our current ice age. But ice core data shows that temperature changes preceded changes in CO2 by about 800 years (because temperature controls CO2 solubility in the ocean). During the latter part of our current ice age, glacial-interglacial cycles occurred with a periodicity of about 100,000 years which correlates with the changes in Earth’s orbit around the sun as it changes from nearly circular to elliptical with an eccentricity of about 9%. Read more ☼

6) How Infrasound from Wind Turbines Can Cause Cancer 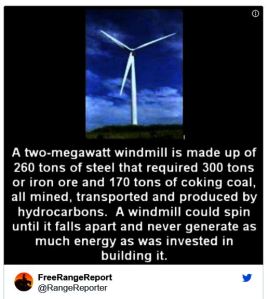 This article from the Alliance for Wise Energy Decisions reviews several research studies that show infrasound from wind turbines can cause cancer. Read the full paper at http://wiseenergy.org/Energy/Health/LFN_and_Cancer.pdf

Here is an introduction:

Recently, President Trump made a statement about the possibility of wind turbine noise causing cancer. Predictably much of the press scoffed at this claim. Even some Republican legislators objected. But what are the facts?

Since this is a technical matter, let’s clarify some basics… Infrasound is Low Frequency Noise (LFN)… Industrial wind turbines generate substantial LFN… A variety of wind turbine LFN caused human and animal health problems have been well-documented (see this small sample of studies)… But what about cancers?

The medical term genotoxins is separated into three main groups: carcinogens, mutagens, and teratogens (i.e. toxins that cause cancer, genetic mutations, or birth defects)… LFN has been identified as a genotoxic agent of disease, capable of inducing blood vessel wall thickening as seen in autopsy, as well as through light and electron microscopy studies. This can lead to well known consequences such as tumor development, cardiac infarcts and/or the need for cardiac bypass surgery. The pathology caused by excessive exposure to LFN is termed vibroacoustic disease (VAD), and has been diagnosed among several occupational and environmentally exposed populations.

See also: Evidence that CO2 emissions do not intensify the greenhouse effect ☼

Before we destroy our energy and economic system, we need to see solid, irrefutable proof that we face an actual climate crisis – and be able to debate and cross examine those who make such claims. So far, instead of a debate, climate crisis skeptics just get vilified and threatened with prosecution.

There’s nothing clean, green, renewable or sustainable about wind, solar or battery power. Those technologies require enormous amounts of land, concrete, steel and other raw materials – and many of their most critical materials are extracted and processed using child labor and near-slave wages for adults, with few or no workplace safety rules, and with horrific impacts on land, air and water quality.

The Biden plan would cost many times the “$1.7 trillion in federal funds over ten years” that his talking points use to entice voters: dollars, lost jobs, lower living standards and fewer freedoms.

Modern industrialized societies simply cannot function on expensive, intermittent, weather-dependent electricity. As Germany, Britain, Spain, Australia and other countries have shown, that kind of energy eliminates 3-4 times more jobs than it creates – especially in factories and assembly lines, which cannot operate with repeated electricity interruptions … and cannot compete with foreign companies that get affordable 24/7/365 coal-based electricity and pay their workers far less than $15, $25 or $45 per hour.